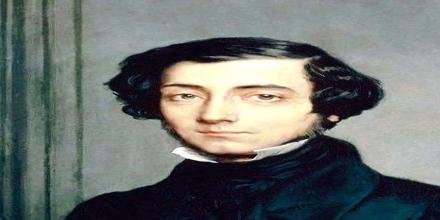 Alexis de Tocqueville, French Diplomat, Political Scientist, and Historian was born July 29, 1805, Paris, France. At age 16 Tocqueville entered the College Royal in Metz to study philosophy. During this time Tocqueville began to have doubts about the role of the aristocracy in French government and suffered a deep religious crisis that would effect him for the rest of his life. After finishing at the College Royal at age 18, Tocqueville moved back to Paris where he studied law. Democracy in America was published after Tocqueville’s travels in the United States, and is today considered an early work of sociology and political science. Tocqueville was active in French politics, first under the July Monarchy (1830–48) and then during the Second Republic (1849–51) which succeeded the February 1848 Revolution. He retired from political life after Louis Napoléon Bonaparte’s 2 December 1851 coup, and thereafter began work on The Old Regime and the Revolution. Tocqueville was a classical liberal who advocated parliamentary government, but was skeptical of the extremes of democracy.