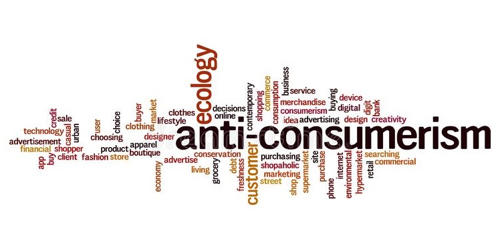 Anti-consumerism is opposition or resistance to a culture or way of life emphasizing the purchase and use of consumer goods. It is a sociopolitical ideology that is opposed to consumerism, the continual buying and consuming of material possessions. It is a social ideology that decries the excessive purchasing and consumption of material possessions. Anti-consumerism is concerned with the private actions of business corporations in pursuit of financial and economic goals at the expense of the public welfare, especially in matters of environmental protection, social stratification, and ethics in the governing of society. It focuses largely on the reasons goods are acquired—that is, on why and how certain commodities are bought and consumed by individuals.

In politics, anti-consumerism overlaps with environmental activism, anti-globalization, and animal-rights activism; moreover, a conceptual variation of anti-consumerism is post-consumerism, living in a material way that transcends consumerism. Much contemporary criticism of consumerism is concerned with social issues and problems seen as inextricably linked to consumerism’s growth and expansion. The anti-consumerist activist movement has gained strength as a reaction to the long-term problematic treatment of consumers and animals, as well as the incorporation of consumer education into school curricula.

Consumerism is the ideology that economic growth is good and that more consumption produces more happiness.  It was consumerism that created the middle-class lifestyle. One primary concern of anticonsumerism is the purchase of consumer goods on the basis of novelty or because of artificially manufactured perceived needs. Anti-consumerism arose in response to the problems caused by the long-term mistreatment of human consumers and of the animals consumed, and from the incorporation of consumer education to school curricula; examples of anti-consumerism are the book No Logo (2000) by Naomi Klein, and documentary films such as The Corporation (2003), by Mark Achbar and Jennifer Abbott, and Surplus: Terrorized into Being Consumers (2003), by Erik Gandini; each made anti-corporate activism popular as an ideologically accessible form of civil and political action. The movement holds that such consumerism produces or contributes to resource depletion and environmental degradation, consumer debt, competitive or conspicuous consumption, unequal distribution of wealth, and global poverty.

The term consumerism also denotes economic policies associated with Keynesian economics and the belief that the free choice of consumers should dictate the economic structure of a society. Anticonsumerism has been encouraged by both religious and secular groups to curb the demand for a continual supply of novel products. Ethical consumerism, according to its most ardent advocates, potentially stands as a novel form of postnational politics in which consumer-citizens reshape the practice of global capitalism from the bottom up.