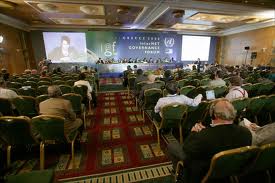 The development of Internet government and Internet governance takes place in a very specific environment and contextual pressure which we must understand and learn, in order to steer at best. This overall change can be identified as manifold, although producing a composed impact on our lifestyle, level of wealth and relationships, inter-regionally and inter-nationally speaking. In particular, three main aspects should be stressed, to better understand the phenomenon:

Globalization appears as an emerging and constantly reinforcing process. Globalization is more than just the “mundialisation” identified by previous researchers, from Braudel to Wallerstein, rooted in Middle Age discoveries and expressed through successive expansions, themselves supported by ever more efficient communication means, up to the complete coverage and information production upon, of the planet as the ultimate cognitive object. Globalization is the effect of this building process in the sense that its overall power relationships (let us think about conflicts or the inequalities of means and performance), but also local initiatives may have an impact instantly or gradually on the rest of the world, thanks to highly interconnected processes and interests. It is, needless to say, that ICTs reinforce this process. Globalization can be perceived as a source of opportunities, as the scale for any activity tends to take place in a much broader arena than before, but also as a constant pressure, with positive and negative consequences.

Economic competition, as a result of the previous phenomenon, became pervasive and almost a safeguard free paradigm, with significant consequences in terms of energy and material output, nature transformation and technology mastering, but also social and knowledge divides as well as damage at various scales and severe environmental threats ahead; economic competition is believed to benefit the customer, encourage innovation at all levels and, as a consequence, generate a better society. It also generates local shifts and undesired effects, with economic, social and cultural dimensions, to which remedies must be found. Public policy and more significantly political elites and leaders in major OECD countries have set up a framework for developing competition which goes even further, changing the rules of politico-economic regimes in a serious program trend called liberalization.

State transformation, in this context, reinforced local means to express needs, projects and alliances in separate terms are growing in parallel with the pressure of globalization and transnational forms of economic competitiveness; it is therefore no surprise to see the state entering a phase of redefinition. Sovereignty is often at the core of the discussion, but fundamentally, what seem to be essential state prerogatives in most regions of the globe, are being rearranged: public service delivery can often be delegated, with the necessary reinforcement of policy making and regulation capabilities towards more efficient, ethically consistent supervision of services. It is of course particularly the case in industries traditionally owned by the state in many countries (telecommunications, energy industries, transport, health, etc.), but also of more specific administrative services (let us think of geographical information systems for instance).

In fact, the numerous e-activities, e-products, and e-services which are currently being displayed in the public sector cannot be fully understood, appreciated and assessed if they are not placed within the much broader framework of state transformation.

However, it is important to stress why. Indeed, the transformation of the state’s status encompasses changes in three separate dimensions, namely:

1. The growing emergence of non-state actors, basically transnational corporations (TNCs) and non-governmental organizations (NGOs). Increasingly, the state has to share its power with these non-state actors. Such power sharing is most pronounced at the supra- and at the infra-national levels.

3. The growing differentiation of the state’s three main functions, namely the service delivery function, the rule-making function and the regulatory function. These three functions can be increasingly treated as being separate from each other and therefore being shifted to the different levels and the different actors.

These three movements are being combined with each other, which leads to the fact that public affairs become more and more fragmented (in terms of functions), diluted (in terms of levels) and outsourced (to non-state actors). There is, in particular, a deficit of cross-functions, seamless operations in which non-state stakeholders can play a proactive role. At the same time, enterprise-based and private individuals’ e-activities develop quite freely and increasingly. There is therefore a place for a different type of steering than the one e-government promotes.

National Board of Revenue is computerizing the revenue budget procedure;

Both Dhaka and Chittagong Stock Exchange are highly computerized and networked, allowing citizens to trade with much more ease than before;

Ministry of Communication Provides online searchable database of contractors, tenders. They have also created a Project Monitoring System for tracking progress of projects:

The Chittagong Customs House has been automated in 2008 in order to increase revenue and check irregularities through enhancement of its efficiency.

Internet Governance is the next big trend occurring in India with at least half a dozen states jumping onto the bandwagon. While these are individual state government initiatives, they lack a national perspective. Yet, with the realization of the benefits of Internet Governance among the central and state governments, in India it can actually become a reality. This will enable a healthy citizen government interface. State governments who are jumping onto the Internet Governance bandwagon are taking initiatives in this direction. Clearly the southern states of Andhra Prades, Tamil Nadu and Karnataka have taken the lead in terms of implementing these projects at different citizen-government interface departments. Other states across the country have been swiftly moving to keep up with the changes in the south, and states like Rajasthan, Gujarat, Maharashtra and West Bengal have been trying to catch up fast. Also coming up are Kerala, Orissa, Punjab and Madhya Pradesh, to name a few.

VOICE project was launched in Vijayawada which is located in the banks of river Krishna in the Krishna district of Andhra Pradesh in June 1998 and implementation was completed in December 1999. There are two components of the VOICE system:

Work stations distributed in key departmentswhere the work of the department has been automated.

Some information can be accessed from an Interactive Voice Response System. Those with an internet connection also can connect to the Web Server and retrieve     information.

The hardware components include four servers located in the municipal office and 18 clients distributed amongst various departments networked in a LAN. Each kiosk has two terminals with multilingual software. Application software such as Lotus Notes for grievance work and a GIS are used actively. Some of the automated functions include town and country planning, taxation, public health, estate, engineering, municipal budget allocations, birth and death certificates and registration of complaints.

Apart from the huge volume of data that was required to be put in, the local officials resisted the move, fearing that an automated system would prevent all scope of bribery which constituted a substantial part of their income. Besides, it would talk a while to weak the system to the precise working requirements of the officers-so as to reduce time required for transition.

The system has effectively reduced corruption, increased responsiveness of public officials with in the municipality. Besides, the system offers ready access to statistics pertaining to population and municipal assets. Overall, it has been able to increase efficiency of the urban local body at large.

As stated at the beginning, it will be important for government to continue to use the nomenclature of internet government, internet governance and internet democracy for a number of reasons. This is a growing subject matter and it is essential that governments create harmony and consistency in any evolutions being undertaken. The growth of ICTs and programs, implementing old and new technologies, requires a continuous stream that can be understood by the public. The pillars of public administration, evolved and articulated over the past three to four centuries, have created a professional and modern public service. This evolution has come about through careful debate, trial and error and implementation. Change as has been needed as public service organizations around the world grew to cope with the challenges of the modern world. Public Administration as a discipline is recognized and accepted in academic and public sector institutions worldwide.

The pillars of Internet government and Internet governance are now being defined and considered as the natural extensions of the sound methodologies of how government organizations should be run. It is recognized that while the rapid evolution of new technologies have created challenges for all governments, sound administrative principles are the order of the day. It is not a question of throwing out all that public sector has developed over the past hundreds of years but rather taking the tried and true principles of public administration and applying them to the “e” world. Governments by nature are conservative organizations and slow to adapt to change. In the private sector slowness in adapting to change can be disastrous for a company who may have to close up shop because of poor administration, bad administrative practices, errors in judgment about changes within their company, or misreading of the public mood. Companies are very much subject to the winds of change.

Internet government can be a more productive version of government in general, if it is well implemented and managed. Internet governance can evolve into participatory governance if it is well supported and architected. What stands in the way of good Internet government and Internet governance is establishment resistance from many who do not wish to change the status quo, and public cynicism, the latter being a much larger issue above and beyond e-government and e-democracy. Given the way that technology developments are currently shaping public expectations however, citizens will continue to expect more as new states of technologies evolve. The transition to participatory governance will probably be slower, messier and costlier than it need be, but democracy always has been somewhat chaotic.