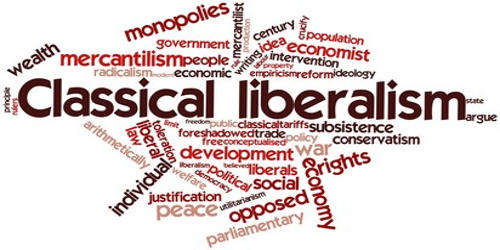 Classical liberalism is a political ideology and a branch of liberalism which advocates civil liberties under the rule of law with an emphasis on economic freedom. Closely related to economic liberalism, it developed in the early 19th century, building on ideas from the previous century as a response to urbanization and to the Industrial Revolution in Europe and North America. It is a political philosophy and ideology belonging to liberalism in which primary emphasis is placed on securing the freedom of the individual by limiting the power of the government. It emerged during the 18th and early 19th centuries in response to the sweeping social changes precipitated by the Industrial Revolution.

The philosophy emerged as a response to the Industrial Revolution and urbanization in the 19th century in Europe and the United States. Notable liberal individuals whose ideas contributed to classical liberalism include John Locke, Jean-Baptiste Say, Thomas Robert Malthus, and David Ricardo. It drew on classical economics, especially the economic ideas as espoused by Adam Smith in Book One of The Wealth of Nations and on a belief in natural law, progress, and utilitarianism. It drew on a psychological understanding of individual liberty, the contradictory theories of natural law and utilitarianism, and a belief in progress. Classical liberalism is often contrasted with new social liberalism, which is supposed to have developed out of the classical variety around 1900. Today, classical liberalism is viewed in contrast to the more politically-progressive philosophy of social liberalism. But social liberalism deviates fundamentally from its namesake at its theoretical root in that it denies the self-regulatory capacity of society: the state is called on to redress a social imbalance in increasingly ramified ways.

As a term, classical liberalism has often been applied in retrospect to distinguish earlier 19th-century liberalism from social liberalism. “Classical liberalism” is the term used to designate the ideology advocating private property, an unhampered market economy, the rule of law, constitutional guarantees of freedom of religion and of the press, and international peace based on free trade. One example of classic liberalism’s beliefs regarding the role of government is found in Thomas Hobbes’s theory that the government was created by individuals to protect themselves from one another.