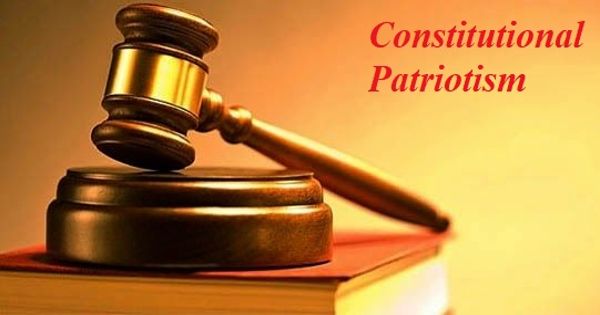 Constitutional patriotism is one of the most attractive yet ill-defined ideas in modern political theory. It is the idea that people should form a political attachment to the norms and values of a pluralistic liberal democratic constitution rather than a national culture or cosmopolitan society. The idea has become most closely associated with Jürgen Habermas and his attempt to propose a plausible form of collective identity for a postnational Germany and for the European Union. It is associated with post-nationalist identity, because it is seen as a similar concept to nationalism, but as an attachment-based on values of the constitution rather than a national culture. It is an influential attempt to reconcile the conflicting imperatives of political legitimacy and cultural inclusiveness.

In general, the concept of constitutional patriotism designates the idea that political attachment ought to center on the norms, the values, and, more indirectly, the procedures of a liberal democratic constitution. In essence, it is an attempt to re-conceptualize group identity with a focus on the interpretation of citizenship as loyalty that goes beyond individuals’ ethnocultural identification. It offers a new theory of citizenship and civic allegiance for today’s culturally diverse liberal democracies. Theorists believe this to be more defensible than other forms of shared commitment in a diverse modern state with multiple languages and group identities. It promotes a mainly political identity, whose political content makes it compatible with a variety of practices and beliefs, but whose thin particularistic form justifies citizens’ commitment to specific institutions.

Constitutional patriotism promises a form of solidarity distinct from both nationalism and cosmopolitanism. It is particularly relevant in post-national democratic states in which multiple cultural and ethnic groups coexist. While numerous attempts have recently been made to reconcile liberal universalism with various forms of cultural membership, it has been an implicit assumption in the literature that nationalism and multiculturalism are doomed to remain strange bedfellows. It was influential in the development of the European Union and a key to Europeanism as a basis for multiple countries belonging to a supranational union. A preliminary observation. Although most normative theories of national identity legitimately claim to be universalizable, they tend to be elaborated in relation to the particular problems faced by particular countries. As a result, liberal theories of citizenship have generally tended to regard nationalist claims with the utmost suspicion.