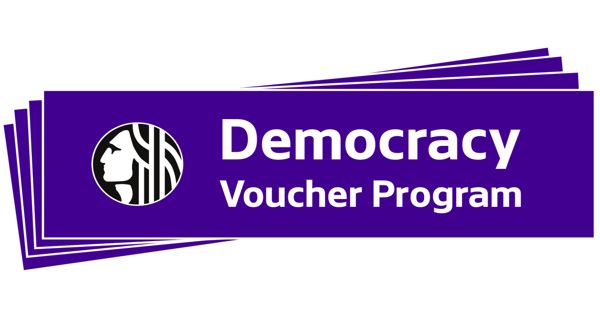 Democracy Voucher – a method of public financing of political campaigns

A democracy vouchers program is a campaign finance system in which all residents are issued vouchers that they can donate to political candidates who, in turn, redeem them for public campaign funds. It is a method of public financing of political campaigns used in municipal elections in Seattle, Washington. The Democracy Voucher Program offers a new way for Seattle residents to participate in local government by supporting campaigns and/or running for office themselves.

Democracy vouchers help democratize the campaign finance process by both: empowering ordinary citizens to participate more in the financing of political campaigns, and empowering political candidates to run for office without relying on — and spending as much time courting — wealthy donors. Supporters argue that the program makes campaign donors more representative of the overall population, lets candidates fundraise for competitive campaigns without relying on big money, and limits the influence of special interests over elected officials. 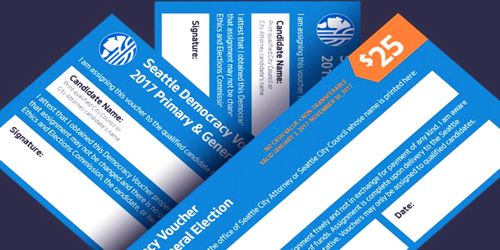 In addition to these laws, participating candidates may not use Democracy Vouchers to:

A functioning democracy requires the engagement of ordinary people, as voters, donors, and candidates. Opponents claimed that, because the vouchers would be distributed ten months before the general election and were assigned on a “first-come, first-served” basis, the program would largely benefit incumbent political candidates rather than challengers, because the latter typically launch their campaigns at a later date than incumbents. A democracy vouchers system helps meet this requirement not just by limiting big money, but by increasing small money.

Every citizen is empowered to donate and every candidate is empowered to use whatever network they have, no matter how economically disadvantaged, as a fundraising base. As a result, incumbents might receive all funds from the program, with available money completely depleted by the time challengers were able to organize campaigns. By helping make the campaign for donations better resemble the campaign for votes, a democracy voucher system deepens American democracy.