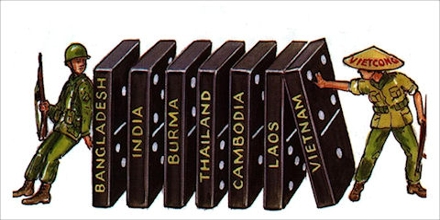 Eisenhower’s domino theory of 1954 was a certain description of the matter and conditions within Southeast Asia at the time. The domino theory was a theory prominent from the 1950s to the 1980s, that speculated if one country in a region came consuming communism, then the nearby countries would follow in a domino effect. The domino theory was used by successive United States administrations through the Cold War.