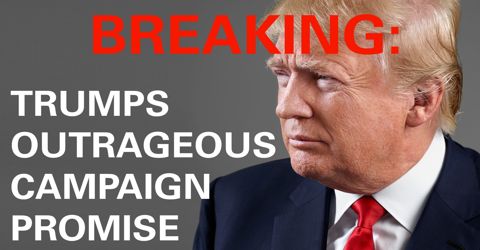 Businessman Donald Trump officially became the Republican nominee at the party’s convention in Cleveland. In Donald Trump’s America, undocumented immigrants will be deported en masse, Arab Americans will be racially profiled. Foreign Muslims will be banned from the US, Syrian refugees sent back to their war-torn country and free trade agreements torn to shreds.

Beyond his businessman credo, it seems voters were most drawn to Trump’s manifesto to shake up Washington and implement radical change in every sector of government. Major Manifesto are:

Trump has constantly promised to “immediately repeal and replace” Obamacare, to start. That is something congressional Republicans have been keen to accomplish, but not capable to without a Republican president. But even with Trump in office, repealing and crafting a replacement for the law will be an arduous task in Congress, where Senate Democrats will fight the slim Republican majority’s efforts. Even as Trump has unrelentingly promised at his rallies to build a wall on the US southern border with Mexico, his plan does not yet appear to have the backing of Republican Senate Majority Leader Mitch McConnell, who repeatedly dodged a question on whether he supports the wall.

On trade, the Republican nominee has vowed to renegotiate or totally withdraw the US from NAFTA, the free trade agreement with Canada and Mexico that Trump has dubbed the “worst trade contract in history.” He could single-handedly do that without Congress, just as he could stymie the Trans-Pacific Partnership he has railed against.

Trump will also seek to move around how the US combats terrorists, tossing aside the attempts by Presidents George W. Bush and Barack Obama to bring Muslim-Americans and other Muslim countries into the fold, rather than risk alienating them.

Trump has said he would seek to work with Muslim countries keen to join in the fight against ISIS, but he has also stoked Islamophobic sentiment in the US and proclaimed, “Islam hates us.” Trump’s economic proposals have focused on tearing down government regulations he views as overly burdensome on US businesses — which would include undoing environmental protections erected under the Obama government and reforming the US tax code.

Prevent American companies from moving jobs to other countries.

Companies move to other countries to pursue higher profits, and Mr. Trump cannot force them to stay. The question is whether he can make it beneficial to do so. It is complex because labor is much cheaper in other countries. Carrier pays workers at its Indiana factory an average hourly wage of $23 — around four times what it plans to pay workers with the same jobs in Mexico.

The efficiency of the American coal industry has improved roughly tenfold since the end of World War II. The work that once required 10 miners now requires just one. Steel making has undergone a similar transformation. That is by far the most significant cause employment in both industries has declined precipitously. Most of those jobs are never coming back.

Increase American economic growth to more than 4 percent a year.

There are only two ways to enhance economic growth: Enhance the number of workers, or boost productivity, the amount the average worker produces. The news is not good on either front. The growth of the American work force is slowing as baby boomers retire and families have fewer children. And Mr. Trump has promised new restrictions on immigration, limiting another source of workers. At the same time, efficiency has increased over the last decade at an average annual pace of just 1.3 percent — and there is little verification that faster enlargement is in the offing.