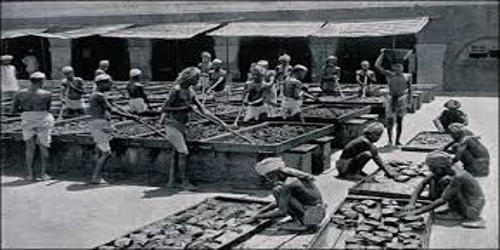 Colonialism is the act of one nation controlling another for economic gain. Exploitation colonialism involves fewer colonists and focuses on the exploitation of natural resources or population as labor, typically to the benefit of the metropole. It is the national economic policy of conquering a country to exploit its population as labor and its natural resources as raw material. The practice of exploitation colonialism contrasts with settler colonialism, the policy of conquering a country to establish a branch of the metropole (motherland). This category includes trading posts as well as larger colonies where colonists would constitute much of the political and economic administration. A reason for which a country might practice exploitation colonialism is the immediate financial gain produced by the low-cost extraction of raw materials by means of a native people, usually administered by a colonial government. The goal was to exploit the weaker country’s natural resources and extract as much wealth as possible.

Exploitation colonialism, in contrast, didn’t require as many colonists to emigrate, and the native people could be allowed to stay where they were — especially if they could be pressed into service as workers. The geopolitics of an Imperialist power determine which of these colonial practices it will follow. In the example of the British Empire, colonists settled mainly in northern North America and in Australia, where the native populations declined due to disease and violence in the course of establishing a facsimile society of the metropole. A prime example of exploitation colonialism was Belgian King Leopold II’s seizure of the Congo in the late 1800s. While he made a vast fortune in rubber and ivory, millions of the Congo’s inhabitants starved to death or died of disease — or were killed by Leopold’s colonial overseers for not meeting work quotas.

Prior to the end of the trans-Atlantic slave trade and widespread abolition, when indigenous labor was unavailable, slaves were often imported to the Americas, first by the Portuguese, and later by the Spanish, Dutch, French and British. Whereas the densely populated countries of the British Raj (1858–1947), in the Indian subcontinent, and the British occupation of Egypt and South Africa, as well as the island of Barbados, were ruled by a small populace of colonial administrators (colonial government) that redirected the local economies to exploitation management to supply the metropole with food, raw materials, and some finished goods.

Colonialism is now normally used in a pejorative sense and is associated with crude exploitation. Exploitation was often reinforced by colonial European geographers who implemented theories such as environmental determinism, which suggested warmer climates produced less civilized people. Few would deny the reality at times of oppression, economic exploitation, and unconcern for human and civil rights.  These theories were among the scholarly canon that helped legitimize colonial activity and expansion into overseas territories.