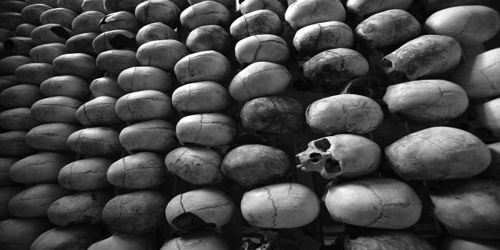 Beginning on April 6, 1994, Hutus began slaughtering the Tutsis in the African country of Rwanda. As the brutal killings continued, the world stood idly by and watched the slaughter. Lasting 100 days, the Rwanda genocide left approximately 800,000 Tutsis and Hutu sympathizers dead.

Who Are the Hutu and Tutsi?

The Hutu and Tutsi are two peoples who share a common past. When Rwanda was first settled, the people who lived there raised cattle. Soon, the people who owned the most cattle were called “Tutsi” and everyone else was called “Hutu.” At this time, a person could easily change categories through marriage or cattle acquisition.

It wasn’t until Europeans came to colonize the area that the terms “Tutsi” and “Hutu” took on a racial role. The Germans were the first to colonize Rwanda in 1894. They looked at the Rwandan people and thought the Tutsi had more European characteristics, such as lighter skin and a taller build. Thus they put Tutsis in roles of responsibility.

When the Germans lost their colonies following WW1, the Belgians took control over Rwanda. In 1933, the Belgians solidified the categories of “Tutsi” and “Hutu” by mandating that every person was to have an identity card that labeled them either Tutsi, Hutu, or Twa. (Twa are a very small group of hunter-gatherers who also live in Rwanda.)

Although the Tutsi constituted only about ten percent of Rwanda’s population and the Hutu nearly 90 percent, the Belgians gave the Tutsi all the leadership positions. This upset the Hutu.

When Rwanda struggled for independence from Belgium, the Belgians switched the status of the two groups. Facing a revolution instigated by the Hutu, the Belgians let the Hutus, who constituted the majority of Rwanda’s population, be in charge of the new government. This upset the Tutsi.

The animosity between the two groups continued for decades. The Event That Sparked the Genocide: At 8:30 p.m. on April 6, 1994, President Juvénal Habyarimana of Rwanda was returning from a summit in Tanzania when a surface-to-air missile shot his plane out of the sky over Rwanda’s capital city of Kigali. All on board were killed in the crash.

Since 1973, President Habyarimana, a Hutu, had run a totalitarian regime in Rwanda, which had excluded all Tutsis from participating. That changed on August 3, 1993 when Habyarimana signed the Arusha Accords, which weakened the Hutu hold on Rwanda and allowed Tutsis to participate in the government. This greatly upset Hutu extremists.

100 Days of Slaughter: The killings began in Rwanda’s capital city of Kigali. The Interahamwe (“those who strike as one”), an anti-Tutsi youth organization established by Hutu extremists, set up road blocks. They checked identification cards and killed all who were Tutsi. Most of the killing was done with machetes, clubs, or knives. Over the next few days and weeks, road blocks were set up around Rwanda.

Over the next several days and weeks, the violence spread. Since the government had the names and addresses of nearly all Tutsis living in Rwanda (remember, each Rwandan had an identity card that labeled them Tutsi, Hutu, or Twa) the killers could go door to door, slaughtering the Tutsis.

Men, women, and children were murdered. Since bullets were expensive, most Tutsis were killed by hand weapons, often machetes or clubs. Many were often tortured before being killed. Some of the victims were given the option of paying for a bullet so that they’d have a quicker death.

Also during the violence, thousands of Tutsi women were raped. Some were raped and then killed, others were kept as sex slaves for weeks. Some Tutsi women and girls were also tortured before being killed. Slaughter Inside Churches, Hospitals, and Schools: Thousands of Tutsis tried to escape the slaughter by hiding in churches, hospitals, schools, and government offices. These places, which historically have been places of refuge, were turned into places of mass murder during the Rwanda Genocide.

Corpses: To further degrade the Tutsi, Hutu extremists would not allow the Tutsi dead to be buried. Their bodies were left where they were slaughtered, exposed to the elements, eaten by rats and dogs.

Media Played a Huge Role in the Genocide: When RTLM (Radio Télévison des Milles Collines) began broadcasting on July 8, 1993, it also spread hate. However, this time it was packaged to appeal to the masses by offering popular music and broadcasts conducted in a very informal, conversational tones.

Once the killings started, RTLM went beyond just espousing hate; they took an active role in the slaughter. The RTLM called for the Tutsi to “cut down the tall trees,” a code phrase which meant for the Hutu to start killing the Tutsi. During broadcasts, RTLM often used the term inyenzi (“cockroach”) when referring to Tutsis and then told Hutu to “crush the cockroaches.”

Many RTLM broadcasts announced names of specific individuals who should be killed; RTLM even included information about where to find them, such as home and work addresses or known hangouts. Once these individuals had been killed, RTLM then announced their murders over the radio.

The RTLM was used to incite the average Hutu to kill. However, if a Hutu refused to participate in the slaughter, then members of the Interahamwe would give them a choice — either kill or be killed.

The World Stood By and Just Watched: Following World War II and the Holocaust, the United Nations adopted a resolution on December 9, 1948, which stated that “The Contracting Parties confirm that genocide, whether committed in time of peace or in time of war, is a crime under international law which they undertake to prevent and to punish.”

Clearly, the massacres in Rwanda constituted genocide, so why didn’t the world step in to stop it? There has been a lot of research on this exact question. Some people have said that since Hutu moderates were killed in the early stages then some countries believed the conflict to be more of a civil war rather than a genocide. Other research has shown that the world powers realized it was a genocide but that they didn’t want to pay for the needed supplies and personnel to stop it.

The Rwanda Genocide Ends: The Rwanda Genocide ended only when the RPF took over the country. The RPF (Rwandan Patriotic Front) were a trained military group consisting of Tutsis who had been exiled in earlier years, many of whom lived in Uganda.

The RPF were able to enter Rwanda and slowly take over the country. In mid July 1994, when the RPF had full control, the genocide stopped.