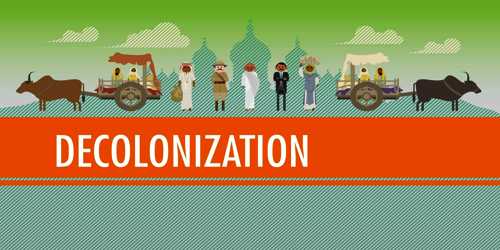 Decolonization was the process by which the British and French empires were dissolved. Their colonies in Asia, Africa and the Middle East were granted independence. Decolonization is defined as the act of getting rid of colonization, or freeing a country from being dependent on another country. An example of decolonization is India becoming independent from England after World War II. This happened within three major clusters:

European countries generally lacked the wealth and political support necessary to suppress faraway revolts; they also faced opposition from the new superpowers, the U.S. and the Soviet Union, both of which had taken positions against colonialism. Korea was freed in 1945 by Japan’s defeat in the war. The U.S. relinquished the Philippines in 1946. Britain left India in 1947, Palestine in 1948, and Egypt in 1956; it withdrew from Africa in the 1950s and ’60s, from various island protectorates in the 1970s and ’80s, and from Hong Kong in 1997. The French left Vietnam in 1954 and gave up its North African colonies by 1962. Portugal gave up its African colonies in the 1970s; Macau was returned to the Chinese in 1999. Decolonization happened as a result of the following:

After Independence – “Origins of the Third World”

These problems were largely due to the fact that Colonialism had left the new nations unprepared. Their economies were based on producing raw materials using unskilled labour. They could not complete with the modern economies of the North but suddenly found themselves having to. These new countries had to rely on previous empires and new powers, for financial assistance and technological advice.

The Effects of Decolonization

Decolonization is a central historical trend. Occurring in four broad phases from 1776 up to 1991, it has shaped the present-day global system of states through the release of revolutionary forces. The term “decolonization” refers to the process through which colonial rule dissolved, and it encompasses the various political, economic, cultural and social dimensions of this process both in the periphery and in the metropole.

Decolonization is not new and we do not aspire to meet the academic demand for new and invigorating paradigms; it is not the academy we are interested in invigorating. Instead, we seek to ground decolonization in the lived experiences and histories of those individuals and communities that have and are living out decolonization, seeking to invigorate connections, struggles, and knowledge that reside beyond the academy.