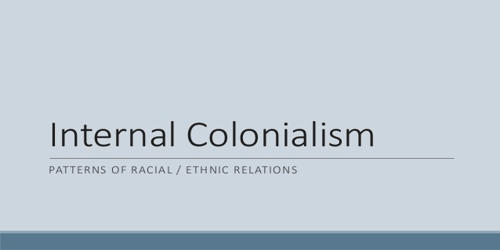 Internal Colonialism is a theoretical and practical guide for understanding sentimental particularities of political society and postcolonial culture. It is the uneven effects of economic development on a regional basis, otherwise known as “uneven development” as a result of the exploitation of minority groups within a wider society and leading to political and economic inequalities between regions within a state. The Internal Colonialism Theory is important to explain, on the one hand, the horizons and the current interest of postcolonial, anticolonial, and decolonial criticism, and, on the other hand, the place of politics in heterogeneous societies. This is held to be similar to the relationship between metropole and colony, in colonialism proper. The phenomenon creates a distinct separation of the dominant core from the periphery in an empire.

The theory of internal colonization looks at how we produce our own forms of racial domination within a society. This theory helps to clarify the social, political, and intellectual imaginary from outside and from within colonial capitalism. Different racial and ethnic groups are subject to forms of oppression forced on them by a dominant group in society. The theoretical and practical experiences of coloniality necessarily extend the horizons of modern sociological theory. But, nowadays, the inter-ethnic tensions between colonizing and colonized are no longer limited to the former territories of colonization.

Internal Colonialism is an integral phenomenon that highlights the singularity of peripheral national power in colonization. Robert Blauner is regarded as the developer of the Internal Colonialism Theory. The term was coined to highlight the “blurred” lines between geographically close locations that are clearly different in terms of culture. Some other factors that separate the core from the periphery are language, religion, physical appearance, types, and levels of technology, and sexual behavior. The cultural and integrative nature of internal colonialism is understood as a project of modernity and has been explored by Robert Peckham in relation to the formation of a national modern Greek culture during the nineteenth century when Greece gained independence from the Ottoman Empire. There are intersubjective factors that interfere at individual and collective identities and in national political systems influencing the plural character of a global society. Conceptually, Internal Colonialism was based at first on the legacies of Marxism, Racism Criticism, indigenous reactions, and national and anti-colonial struggles since the decade of 1950.

However, it is necessary to clarify the theoretical definition of Internal Colonialism to help the progress of the debate in the postcolonial theory framework and in social theory. The main difference between neocolonialism and internal colonialism is the source of exploitation. In the former, the control comes from outside the nation-state, while in the latter it comes from within.