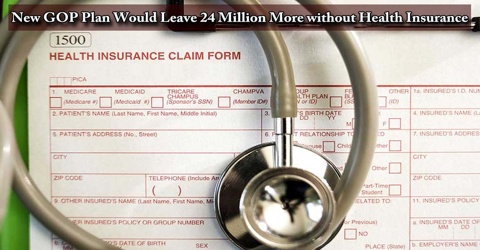 The Republican plan to replace the Affordable Care Act would leave 24 million more Americans without health insurance by 2026 than under current law, according to an analysis Monday from the Congressional Budget Office.

The long-anticipated score immediately puts the writers and supporters of the GOP Obamacare repeal bill on the defensive. It is also certain to complicate the party’s already troubled efforts to repeal and replace the Affordable Care Act. In total, an estimated 52 million people would be uninsured by 2026 under the GOP plan, compared to 28 million who would lack insurance under the current law.

The Republican bill, titled the American Health Care Act, would reduce the federal deficit by $337 billion over 10 years, the CBO said.

By the year 2026, a total of 24 million more Americans would be uninsured then they would be under Obamacare, the CBO said.

The estimates starkly contrast with the Trump administration’s claims that more people would be insured under the Republican bill than would be if Obamacare was kept in place. And they portend possibly even steeper obstacles to getting the bill passed and signed into law.

The projected loss in coverage next year alone equals about 70 percent of the 20 million or so people who have gained insurance as a result of the Affordable Care Act, as Obamacare is formally known. The total loss in coverage over the next decade would wipe out Obamacare’s gains in coverage, and then some.

“In 2026, an estimated 52 million people would be uninsured, compared with 28 million who would lack insurance that year under current law,” according to the CBO’s report. The Republican bill also would reduce the federal deficit by $337 billion over the next decade, the CBO estimated in an analysis of the embattled proposal, which is currently working its way through the House of Representatives.

That reduction represents the difference between a $1.2 trillion decrease in direct spending and a reduction of $883 billion in revenues.

The CBO also estimates that premiums for individual health plans in next year and in 2019 would on average by 15 to 20 percent higher than what they would be under Obamacare.

Premiums are expected to jump up to 20 percent in the individual market in 2018 and 2019, but after that, they would decrease. By 2026, average premiums would be roughly 10% lower than under the current system.

But the increase in premiums would be much steeper for some Americans in the individual market, particularly older people with lower incomes. However, those who earn too much to receive Obamacare subsidies would be better off under the GOP plan no matter their age. For 2017, the thresholds to qualify are $47,500 for individuals and $97,200 for families of four.

The CBO said the lower average premiums over time are expected to “attract a sufficient number of relatively healthy people to stabilize” the individual plan insurance market, even though the tax credits offered to customers by the GOP plan are “less generous” and structured differently than under Obamacare. The estimates also will be heavily cited by Democrats who oppose not just this particular GOP replacement plan, but any legislation that would gut and replace Obamacare. The CBO report contradicts claims by the Trump administration that Obama is so-called death spiral, with skyrocketing premiums and falling enrollment. The report says the individual health plan market likely would remain stable in most areas of the United States under either Obamacare or the Republican plan.

The CBO’s analysis is an uncomfortable, but long-expected, reminder to Republican leaders, including President Donald Trump, about the potential political perils of getting rid of Obamacare. The ACA has been credited with driving down the nation’s uninsured rate to record low levels, from 18 percent of Americans in 2013 to 10.6 percent in the last quarter of 2016.

The CBO’s estimates about the number of people who would lose coverage reflect the effect of the Republican bill’s revocation of the Obamacare requirement that most Americans have some form of health coverage or pay a fine, as well the bill’s rollback of funding for the expansion of Medicaid starting in 2020.

The CBO’s projections come days after the Brookings Institution estimated that the bill would increase the number of uninsured Americans by more than 15 million, and the Joint Committee on Taxation estimated it would cost the federal government an additional $600 billion over a decade.

In anticipation of the estimates about the loss of insurance by millions, backers of the bill sought to delegitimize the CBO’s analysis. That critique of the CBO conflicts with the fact that members of Congress of both parties for the past four decades have depended on the office to provide analyses of budgetary and economic issues. The conservative case against the bill is that it does not go far enough in repeal in the ACA because it would continue to issue subsidies, albeit in reduced amounts, to people to help them buy individual health insurance plans. Conservatives also do not want to delay the rollback of Medicaid funding until 2020.

But in the Senate, several GOP senators have said they will not support a replacement bill that does not protect coverage gains made by Medicaid under Obamacare. Other Republican senators object to defunding of Planned Parenthood, as the GOP bill would do.