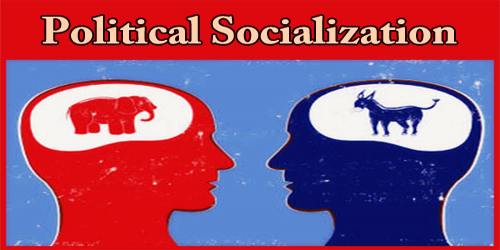 In the fields of the political sciences, ‘Political Socialization’ is the process through which a person develops political beliefs and opinions that influence their behavior in social spheres. Socialization is largely a one-way process through which young people gain an understanding of the political world through their interaction with adults and the media. Actually, Political socialization is the “process by which individuals learn and frequently internalize a political lens framing their perceptions of how power is arranged and how the world around them is (and should be) organized; those perceptions, in turn, shape and define individuals’ definitions of who they are and how they should behave in the political and economic institutions in which they live.”

Political socialization also encompasses the way in which people acquire values and opinions that shape their political stance and ideology: it is a “study of the developmental processes by which people of all ages and adolescents acquire political cognition, attitudes, and behaviors.” It refers to a learning process by which norms and behaviors acceptable to a well-running political system are transmitted from one generation to another. It is through the performance of this function that individuals are inducted into the political culture and their orientations towards political objects are formed. Schools, media, and the state have a major influence in this process.

Political scientists Gabriel Almond and James Coleman once observed that we “do not inherit our political behavior, attitudes, values, and knowledge through our genes.”Gabriel A. Almond and James S. Coleman, eds., The Politics of the Developing Areas (Princeton, NJ: Princeton University Press, 1960), 27. Instead, we come to understand our role and to “fit in” to our political culture through the political learning process. Pamela Johnston Conover, “Political Socialization: Where’s the Politics?” in Political Science: Looking to the Future, Volume III, Political Behavior, ed. William Crotty (Evanston, IL: Northwestern University Press, 1991). Political learning is a broad concept that encompasses both the active and passive and the formal and informal ways in which people mature politically. Carole L. Hahn, Becoming Political (Albany: State University of New York Press, 1998). Individuals develop a political self, a sense of personal identification with the political world. Developing a political self begins when children start to feel that they are part of a political community. They acquire the knowledge, beliefs, and values that help them comprehend government and politics.

In most publications, researchers concentrate on the relationship of political knowledge, and so forth, and democracy.

The following cultural prerequisites for a stable democracy are often named: a felt need to participate politically, feelings of (national) solidarity and of connectedness with fellow citizens, attachment to and belief in the legitimacy of the democratic system, political efficacy, democratic attitude (willingness to settle differences according to certain rules, by eschewing violence for example), openness for other opinions, tolerance, acceptance of human equality. It seems probable that the degree of political democracy in a given society will be greater to the extent that the fundamental principles of democracy are more frequently and more intensively supported. The problem of the chicken and the egg is applicable in this area: is political culture the cause or the effect of a stable democracy?

Agents of socialization sometimes referred to as institutions, work together to influence and shape people’s political and economic norms and values. Such institutions include, but are not limited to: families, media, peers, schools, religions, work, and legal systems.

Political efficacy refers to individuals’ perceptions about whether or not they can influence the political process. People who have a strong sense of political efficacy feel that they have the skills and resources to participate effectively in politics and that the government will be responsive to their efforts. Those who believe in the legitimacy of the political system and are highly efficacious are more likely to participate in politics and to take strong stands on public-policy issues.

Many researchers are alarmed when statistics show them clearly the low level of political knowledge and interest of the “average” citizen because they assume that there is a relationship between the amount of political knowledge and interest and the level of democratic commitment. One pair of Dutch researchers has warned, for example, “There is a danger that a generation of virtually a-political youth is growing to adulthood, a large part of which primarily those who are the most economically and socially vulnerable are now, and will be as adults, susceptible to fascist and racist pressures. Educators, do something about it” (Roeders, Van der Linden, 1983). The aim of this type of research, as the quote above indicates, is to provide information that can be used to supplement or correct the political socialization which has already taken place.

Much political socialization in the United States passes on norms, customs, beliefs, and values supportive of democracy from one generation to the next. Americans are taught to respect the democratic and capitalist values embedded in the American creed. Young people are socialized to respect authorities, such as parents, teachers, police officers, and firefighters, and to obey laws.