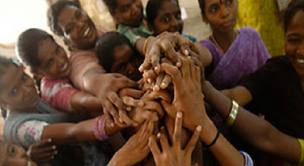 The Role of Micro-Finance in the Empowerment of Women

Women in developing countries are subject to various forms of discrimination and gender inequality. This is reflected in the female-male population ratios, particularly within North Africa and Asia which, in contrast to the ratios of European and North American countries, show that the number of males exceeds the number of females. These ratios are a consequence of various forms of discrimination against girls and women.

In Bangladesh, the female-male ratio is estimated to be 0.94. This means that around 8.7% of the total female population, or 3.7 million women, are missing. In other words, if men and women were treated the same way, 3.7 million more women in Bangladesh would be alive today. These numbers reflect the fact that Bangladeshi girls and women are neglected in terms of health care, food and education. Girls are seen as a burden to their families, and are therefore not given the same attention and care as boys.

Bangladesh has during the last 30 years experienced a vast growth in the number of projects working with ‘micro-finance’ projects. These projects have as their objective to give poor people access to credit in the form of loans or savings. Micro-finance is often being praised for being a very efficient poverty alleviating tool, and particularly for being influential in empowering women. The concept is on the other hand also subject to various criticisms from scholars and practitioners who claim that the effect of micro-finance on the empowerment of women is uncertain. One point of criticism is that many people face great difficulties in paying back their loans, because they do not have the prerequisites for investing or handling their money in a sensible way. Another criticism is the claim that evaluations of micro-finance projects tend to neglect the views of its target-groups, that is, the voices of the poor women.

This thesis analyzes the effect of micro-finance on the empowerment of women, through the views of female participants in a micro-finance project in Horipur Union under Kushtia District, Bangladesh.

The Role of Micro-Finance in the Empowerment of Women

The empowerment of women is closely linked with micro-finance programs, because many studies have shown that improving women’s income through micro-finance has a substantial effect on their empowerment. A vast amount of literature exists on the subject, and the extent to which microfinance programs empower women, is a highly debated subject, which scholars and practitioners tend to disagree upon. Micro-finance is in this thesis defined as an umbrella term which includes loans, savings, insurance, transfer services and other financial products targeted at low-income clients.9 Empowerment is defined as the fulfilling of the strategic gender needs of women,10 and as a process by which people get to expand their possibilities to live the kinds of lives they want. This definition is explained more detailed later on.

The basic idea behind micro-finance is to end poverty by increasing people’s access to credit – be it in the form of institutional credit, or group-based savings involving only financial means from the participants themselves. Often traditional banks and financial institutions have failed to meet the needs of particularly poor women. This has created a need for alternative institutions and programs that meet this group’s demand for financial services and saving possibilities. Women constitute the majority of participants in micro-finance programs, although the programs initially did not have women as their specific target group.

The pioneer within micro-finance is the Grameen Bank in Bangladesh, founded in 1976. Its group based lending approach has become the guiding principle for more than 750 small-scale microfinance programs operating in Bangladesh, and the approach has been replicated in more than countries. Today the Grameen Bank has 7.27 million borrowers, 97 percent of whom are women.13 The Bangladeshi experience on micro-finance is discussed more thoroughly in the next section.

Despite the widespread use of micro-finance as a poverty alleviating empowerment tool, particularly among women, it is subject to various points of critique and discussion. A general criticism towards micro-finance is that the programs rely heavily on donor subsidies. This means that even projects that have been operating for years are unable to function on their own and are unable to fully cover their operational costs. The majority of programs are highly dependent on donor funding, because they do not have the possibility of charging higher interest rates, as these would be too high for borrowers to bear.

Grameen Bank is an Ngo that mostly deals with landless people, the disadvantaged class of the society who are forced to live in and exploited condition in the rural society , are the target group of Grameen bank.

Many activities like micro credit, poultry, livestock, fisheries, the Grameen Bank for poverty alleviation is conducting social forestry, Vegetable cultivation, sericulture, carpentry etc. Women need to buy input, better equipment and improved household technology. IFAD recognizes that poor Women have limited access to credit not only because of being poor, but also because several of the constraints are gender-specific.(Mohiuddin 1991).

The purpose of the present study was to evaluate the impact of micro credit towards women empowerment. The study aims to find out the answer to the following questions:

Objectives of the Study

The main focus of the study was to evaluate the impact of micro credit in alleviation poverty of rural women in upgrading their economic and social status. The following objective was formulated to give proper direction to the study:

Justification of the study

Increased productivity, income, consumption and participation of the beneficiaries in the socio-economic development activities are some of the major prerequisites for the overall economic development of Bangladesh .Most of the NGOs are believed to be working to meet-up the prerequisites for socioeconomic development since the independence of Bangladesh. The NGOs were welcomed in Bangladesh to improve the socio-economic condition of the poorest section of the population .As they do not have sufficient employment opportunities and income sources to maintain their livelihood, they are vulnerable class of the society and though the involvement with NGO activities, it is expected that this personal, social and economic enlistment would be possible.

In order to improve this position, a large number of NGO’s like Grameen Bank, BRAC, ASA, RDRS and PROSHIKA have been working now in the country. Grameen Bank works at the grass root level for socio-economic development and employment generation.

Access to credit is an important for the poor people both men and women to improve socio-economic condition and their standard of living. Most of the NGOs are working to improve the socio-economic condition. Grameen Bank Works at the grass root level for socio economic    development and employment generation .but there is a very little study on the impact of its activities on the women.

So, there is a need to conduct to see and realize the performance of poverty alleviation programs arranged by Gameen Bank. The researcher  intended to take an attempt to know how the respondents develop their socio-economic condition due to the involvement with Grameen Bank micro credit program to know why anyhow different changes in varied aspects like change in income, change in food consumption, change in housing ,environment etc. are taken place .The findings of this study also might be expected to be useful to the  researchers, planners and policy makers and debtors of Grameen Bank and similar NGOs and to other organizations and personnel.

Assumption of the study

An assumption is the supposition that an apparent fact or principal is true in the lights of the available evidence. The researcher cherished the following assumptions in mind while undertaking the study:

i.            The respondent was capable of furnishing proper responses to the question contained in the interview schedule.

iii.            Information furnished by the beneficiaries included in the sample was representative of the whole population of the study.

iv.            The Data collected from the respondents were free from interviewer bias.

Limitations of the study

Considering the time, money and other researcher s to the researcher, the following limition were taken into consideration

a)      The study were confined to only one union namely Horipur under Kushtia district.

c)      In a present –dependent economy like Bangladesh where women are mostly illiterate, it is difficult to get accurate information with respect to their activities on production, income and the like

d)     There are many landless rural women in the study area, but only the rural women involved with Grameen Bank program were considered for this study.

e)      For information about the study, the researcher had to depend on data as furnished by the selected rural women beneficiaries during data collection.

f)       The researcher was a male and the respondents were females. Some initial difficulties were faced in interviewing the female respondents due to cultural barriers. However, this gender problem was subsequently overcome by creating proper rapport with the beneficiaries in association with Grameen Bank staff.

For clarity of understanding, certain terms frequently used throughout the study are defined and interpreted as below:

Much of the current interest in microcredit stems from the Microcredit Summit (2-4 February 1997), and the activities that went into organizing the event. The definition of microcredit that was adopted there was:

Definitions differ, of course, from country to country. Some of the defining criteria used include- size – loans are micro, or very small in size target users – micro entrepreneurs and low-income households utilization – the use of funds – for income generation, and enterprise development, but also for community use (health/education) etc. terms and conditions – most terms and conditions for microcredit loans are flexible and easy to understand, and suited to the local conditions of the community

Impact is a term, which refers to sustained structure changes by influencing.

Problem means any difficult situation which requires some action to minimize the gap between “what ought to be” and “what is”.

Housing environment includes housing unit, toilet condition and sources of drinking water and ownership and ownership of some selected not land assets, which are essential tools in a Village life.

The condition of having insufficient resources or income . Poverty is a lack of basic human needs including adequate and nutritious food, clothing, housing; clean water and health services. Poverty prevents people from realizing many of their desires.

Respondent refers to the women beneficiaries who are participants in the grameen Bank micro credit development activities and are included in the sample.

The orientation of an individual external to her own social  environment.

The term refers to being about such changes on an increasing trend in different aspects of economic and social development starting from a level below which minimum standard of living like food, cloth shelter and personal amenities cannot be mentioned.

An organization developed by private initiatives being foreign and financed is a Non-Government Organization (NGO).It works independently with and is mandated to collaborate with others unless there is any felt need.

Total earning of an individual and the members of his family from farming and other  sources (Business, services, daily working etc) during a year. It was however the gross annual expenditure and expressed in Taka.

Loan was defined as the amount of money received by the clients for some specific purposes at a certain rate of interest and generally repayable in a year.

Another School of the widespread influence of the empowerment concept is the Human Development Index (HDI), formulated by the United Nations Development Programme (UNDP).

The HDI perceives empowerment as a process of change, by which people, who are denied the

Ability to make choices, acquire such a capacity. Within the HDI scheme, poverty definitions as well as empowerment definitions have been highly influenced by Sen’s capability approach, which defines poverty as expanding people’s opportunities to live the kind of life they value. Particularly in relation to the empowerment of women, Nussbaum has played a significant role in making the approach applicable. This is discussed more thoroughly in the section The Capability Approach.