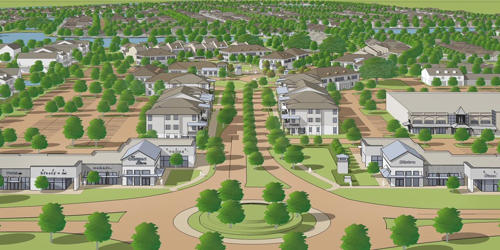 Suburban areas have lower population density than inner-city neighborhoods. The suburban colonization process is observed in larger cities that have suffered population and political power loss to suburbs. Suburban colonization happens when people move to suburbs, taking their political power with them from the place they leave. The definition of colonialism is the act of one nation controlling another for economic gain. Most prominently during the post-World War II era, suburbs have been synonymous with the “American Dream” and prosperity. Other colonialism is often studied for the effects upon those already inhabiting the colonized area, but students of suburban colonization tend to take a greater interest in the effects upon the metropole. Urban areas are seamlessly blended into sprawling communities with borders between the two often blurred, but the distinctions are difficult to miss.

A suburban area is a community outside of an urban center and its outskirts. As hinterlands acquire more population and more power then, according to the one man one vote principle, they get more votes in representative bodies, notably metropolitan regions or greater urban areas such as the Greater Toronto Area or Greater London. Suburban votes then come to outweigh inner-city votes, just as, a century earlier, urbanization or urban colonialization diminished the power of rural voters. Common features of these communities are single-family homes interspersed with shopping malls and strips, as well as office buildings.

Decisions of these bodies accordingly begin to favor people who live in suburbs, providing more car-oriented and commuter services and more favorable property tax rates for single-family homes as tenants in downtown apartment buildings pay higher rates. Suburban building often tends to be homogeneous and predictable; residences in the suburbs are sometimes chided as being cookie-cutter and are, in professional terms, for the most part, tract housing.

There are many perceived advantages to living in the suburbs. In urban areas that are growing rapidly, services may be developed that favor urban sprawl, such as large trunk sewers, express highways, or shopping malls, as other services such as youth recreation disappear from downtown areas. Suburban neighborhoods offer a community and, in some cases, residents can participate in a Homeowners Association to influence the policies that are implemented. They are considered to be fairly quiet, provide quality schools, and are safer than urban areas. This increases population drain to the suburbs as the quality of life drops, but the increased population may then drive more people further out to the hinterlands which increases the political rewards for sprawl. Suburbs are not a fail-proof beacon of safety. Gangs and drugs still exist in the suburbs, and crime is not vanquished from these areas.