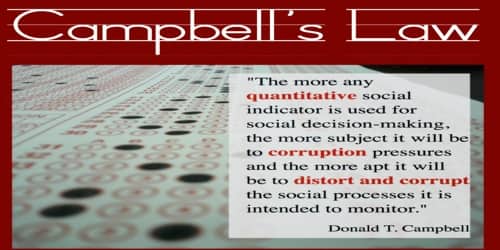 Campbell’s Law is the observation that once a metric has been identified as a primary indicator of success, its ability to accurately measure success tends to be compromised. This law is an adage developed by Donald T. Campbell, a psychologist and social scientist who often wrote about research methodology, which states “The more any quantitative social indicator is used for social decision-making, the more subject it will be to corruption pressures and the more apt it will be to distort and corrupt the social processes it is intended to monitor.” On a similar note, Campbell also wrote:

‘Achievement tests may well be valuable indicators of general school achievement under conditions of normal teaching aimed at general competence. But when test scores become the goal of the teaching process, they both lose their value as indicators of educational status and distort the educational process in undesirable ways.’

Campbell used the crime rate as an example in his paper.  He pointed out that a decrease in a city’s crime rate may not demonstrate a true reduction in the number of crimes that have been committed but may simply reflect how the police force has changed procedures to lower the number. They may have decided, for example, to change which police encounters need to be formally recorded. They may also have downgraded some crimes to less serious classifications. Campbell’s law can be seen as an example of the cobra effect. The social science principle of Campbell’s law is sometimes used to point out the negative consequences of high-stakes testing in U.S. classrooms. This may take the form of teaching to the test or outright cheating. An example is “The High-Stakes Education Rule” as described in the Learning-Disadvantage Gap.

In the era of big data, Campbell’s Law is often cited as a warning about the dangers of making data-driven decisions based on a single key performance indicator (PKI).

There are closely related ideas known by different names, such as Goodhart’s law and the Lucas critique. Another concept related to Campbell’s law emerged in 2006 when UK researchers Rebecca Boden and Debbie Epstein published an analysis of evidence-based policy, a practice espoused by Prime Minister Tony Blair.

Campbell’s Law imparts a more positive but complicated message. It is important to measure progress making use of quantitative and qualitative indicators. In his article, “Assessing the Impact of Planned Social Change”, Campbell emphasized that “the more quantitative social indicator used for social decision-making is subjected to corruption pressure and liable to distort and damage social processes it meant to monitor.” Campbell’s Law helps people discern that the No Child Left Behind and Race to the Top statutes can impair education.