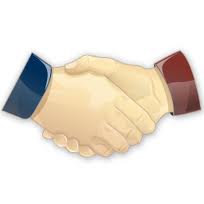 Assignment on Conciliation and Mediation

Conciliation and mediation are recognized as two important and effective modes of alternative  dispute resolution system.   These are considered as effective and meaningful alternatives to litigation through courts for resolution of disputes through the guidance and assistance of a neutral and impartial third party.

This method of resolving dispute through mediation and negotiation is, however, not foreign in our country.   Village Panchayats and Nyaya Panchayats have been functioning in the villages and many disputes at the village level have been settled through conciliation and mediation in these Panchayats for a very long time.  But such remedy through Panchayat was sought for more as convenience as they are more easily approachable than the Courts which are located far away from the villages.

However, with the passage of time there has been overcrowding in numbers of litigation.    There has also been delay in disposal of litigation for various reasons like shortage of judges and judicial officers, shortage of infrastructure and increase in population.   Better understanding and awareness of their rights by the general public has also led to filing of more cases in the courts.   Accordingly, it was thought that as there is a heavy traffic in the main thoroughfare, a bye pass is to be opened to ease the pressure in the main thoroughfare and consequently the device of alternative dispute resolution system like conciliation and mediation has been carved out.    This form or process is settlement geared and is also definitely cost saving.   It also helps the parties to adopt a problem solving approach to find out a “win win” outcome.    When a dispute is resolved through this process, there is no winner or loser for the parties agree to the solution whereas in a litigation there is always a loser and even  the winner of the litigation goes back home at times feeling fully exhausted physically, mentally and also financially.

Under the Code of Civil Procedure, 1908 express provisions are contained in the form of Order XXXII A, Rule 3 where under a duty is cast upon the courts to make efforts for settlement in suits relating to matters concerning a family.   Similarly, under Order XXXVII Rule 5B, a duty is cast upon the court in a suit against the government or a public officer to assist in arriving at a settlement.

However, an elaborate codified recognition has been given to the two concepts   only with the enactment of the Arbitration and Conciliation Act, 1996.   In the said Act, a separate chapter is devoted to the concept of conciliation.   Of late, even in civil litigation provisions have been made for getting the disputes resolved through the process of arbitration, mediation, conciliation or Lok Adalats, if the court is of the opinion that the case could be settled through one of the said modes.   The said procedure is generally adopted after completion of the process of admission/denial of the documents as at that stage when issues are framed in the suit, the court becomes aware of the actual issues involved in the suit.   It is, however, interesting to note that under the provisions of section 89 Code of Civil Procedure, 1908 the court is given the power and jurisdiction to refer the dispute/litigation to an arbitrator without even existence of an arbitration clause.   Therefore, there is probably a grey area which is required to be settled through an appropriate pronouncement as to whether or not consent of the parties would be necessary for such reference, which would probably give rise to an arbitration agreement.

However, it is not my intention to probe in-depth to the concept of arbitration and user of the same as a tool of alternative dispute resolution system, as the same was discussed at length in the morning session.  I would, therefore, restrict myself to the topic kept aside for the afternoon session, that is, the concept and idea of conciliation and mediation pitted against litigation.    The concept of conciliation has now been given a statutory recognition under the Arbitration and Conciliation Act, 1996.  But it is not very clear as to whether the two concepts of conciliation and mediation would have different connotation or they would refer to the same mode.   According to most of the authorities they are overlapping.   But the expression conciliation is not defined in the Act.  It only states that conciliation could take place not only in contractual and commercial disputes but also in all disputes arising out of legal relationship.   This expression `conciliation’ is defined by the International Labor Organization which is adopted by the Advisory, Conciliation and Arbitration Service which reads as follows:-

“The practice by which the services of a neutral third party are used in a dispute as a means of helping the disputing parties to reduce the extent of their difference and to arrive at an amicable settlement or agreed solution.   It is a process of orderly or rational discussion under the guidance of the conciliator.”

The difference between conciliation and mediation has also been outlined by the same authority as follows:-

“Mediation may be regarded as a half way house between conciliation and arbitration.     The role of the conciliator is to assist the parties to reach their own negotiated settlement and he may make suggestions as appropriate.   The mediator proceeds by way of conciliation but in addition is prepared and expected to make his own formal proposals or recommendations which may be accepted.”

In India, however, mediation does not have any statutory recognition and existence and, therefore, would not be bound and restricted to any rules and statutory restrictions and limitations, unless it is accepted that both the expressions are overlapping.

A conciliator must be seen as an independent and impartial person and he must enjoy confidence of both the parties.  The parties should be able to repose trust and confidence on him so as to enable them to share their secrets and their thinking process with the conciliator with the belief that the same should not be divulged to other party without specific instructions in that regard.   Therefore, a conciliator is bound by rules of confidentiality and not by the strict rules of the Code of Civil Procedure, 1908 and the Indian Evidence Act, 1872.

A large number of disputes arise in the commercial areas, matrimonial matters and labor and employment areas.   These disputes are being resolved by resorting to litigation.   However, in these areas conciliation and mediation could play an effective role in bringing about a solution as they involve emotional angle and strong feelings in the disputing parties, which are best settled by conciliation.

I have dealt with the provisions and the procedure of conciliation at length in order to pinpoint that there is no conflict between a litigation and a conciliation and mediation proceeding.   They are complimentary to each other, like a bye pass.  Choice is of the parties to choose one but one has a choice to come back to the main thoroughfare also, when so intended.   Besides, when a reference is made by the court under section 89 Code of Civil Procedure, 1908 to a conciliator or a mediator, not only the court retains the supervisory jurisdiction over the matter but the lawyers and the litigants continue to be participants therein.    It is with the active support of all the three participants along with an additional player, namely, the mediator or conciliator that a negotiated mutual settlement is arrived at.  Therefore, the system of alternative dispute resolution through mediation and conciliation may not and should not be seen as competitive to litigation in court.

I  would wish to end up my speech by quoting Mr. Fali S. Nariman, who has said in a message that was published in the Handbook on Arbitration, as follows :-

“ A mediator or conciliator must lead parties into the gray shaded areas of a problem where a variable range of outcomes becomes available to achieve a mediated consensual resolution.   It is the skill with which this “grey  area” is negotiated that the success of Part III of the Act will  depend.

Lawyers must advise their clients to use Part III more often – they must educate and explain clients on the benefits of conciliation.”