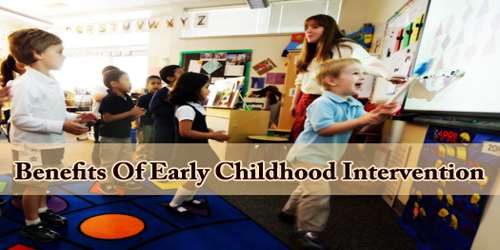 Early childhood intervention (ECI) is a term that refers to programs that provide extra resources to families with children that have or are at risk of developmental delays or disabilities. The goal of early childhood intervention is to give families with these children assistance and support to maximize their child’s development in many ways: physically, cognitively, socially, and emotionally.

Early intervention is a system of coordinated services that promotes the child’s age-appropriate growth and development and supports families during the critical early years. In the United States, some early intervention services to eligible children and families are federally mandated through the Individuals with Disabilities Education Act. Other early intervention services are available through various national, regional, and state programs such as Crisis Nurseries and Healthy Start/Healthy Families America. Starting with a partnership between parents and professionals at this early stage helps the child, family, and community as a whole.

The universal framework of early childhood intervention relies on the recognition of the individuality of all children in terms of abilities and disabilities and on a comprehensive approach that encompasses the child’s health and well-being. It relies on the knowledge that children are born active and are ready to communicate and learn and that stimulating and responsive social and physical environments are essential for development.

To meet the goals of early childhood intervention, services are personalized for the child and family as a unit and in their specific social and cultural context. A family approach builds on the assumption that developmental problems must be addressed in the environmental context of the child. A basic premise is that the unique and complex needs of each child and family are best met by an interdisciplinary approach in collaboration with the family. A systems approach recognizes that the family and child are influenced by the world of work, the preschool, available services for health, and other major social systems. On the macro level, early childhood intervention is influenced by broader factors of laws, culture, attitudes, values, geography, and economy.

For children that have or are at risk for having developmental delays or disabilities, it’s critical to intervene early. The highest rate of learning and development occurs in the years before a child starts school. Something not learned in these most important years will be harder to learn later in life. Children who receive early childhood intervention score better on tests are more likely to graduate from high school and less likely to require special education.

Early childhood intervention (ECI) is good for whole families, too. Families with a disabled or developmentally delayed child have higher rates of stress and divorce more often. A child with difficulties is more likely to be abused than a non-disabled child. Early intervention can reduce family stress by providing the family with supportive services. Showing parents how to teach a developmentally delayed child can make them feel better about their parenting skills.

Early childhood intervention is also good for society. It encourages independence in children which can prevent that child from becoming dependent on society later in life. Early intervention has been shown to reduce the likelihood of a child committing a crime later in life or becoming a pregnant teen.

The Centers for Disease Control and Prevention (CDC) reports that early intervention is most likely to be effective earlier in a child’s life rather than later, leading to many improvements that are noticeable as a child moves into school. Short-term benefits of early intervention often include primary school readiness, increased learning and school performance, better health, and nutrition, as well as a safer and more supportive home environment.

Those benefits of early intervention are no small thing, and they continue to expand exponentially as a child gets older. In addition to educational benefits, early intervention can reduce instances of crime, drug use, and teen pregnancy as children grow into adolescents and young adults.

Criticism – Some criticism of early childhood intervention asserts that growing up is different for each individual, depending on genetic endowments and environmental circumstances. However, one thing is common to everyone: the process, in order to take full advantage of the species’ potential, must be a natural ripening, without interference from clumsy intruders. Some critics of early childhood intervention say that no one should push healthy children to learn any skill or academic discipline before they choose to do so of their own accord.

The family-centered ethos in early intervention programs, however, supports families’ desires for their children to be engaged, independent, and social in their everyday routines. The choice is therefore not the child’s but the parents’, who are urged to follow the child’s lead.

The International Society for Early Intervention (ISEI) provides a forum for professionals to communicate about advances in the field of early intervention. In Europe, Eurlyaid (European Association on Early Childhood Intervention), a working party of professionals and representatives of parent associations, is involved in promoting early intervention for children who are at risk of or are affected by developmental disabilities. The European Agency for Development in Special Needs Education is also involved in promoting early childhood intervention in Europe.