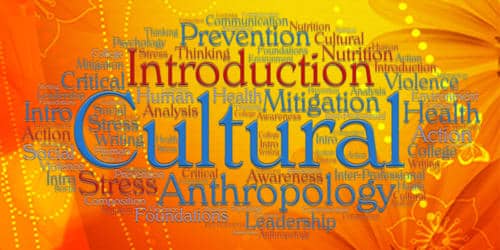 Anthropology is the scientific study of humans and their cultural, social, biological, and environmental aspects of life in the past and the present. The definition of cultural anthropology is the study of past and present societies and the language, traditions, customs, and behavior that are both similar or different from one to another. Cultural anthropologists specialize in the study of culture and peoples’ beliefs, practices, and the cognitive and social organization of human groups. Anthropologists have pointed out that through culture people can adapt to their environment in non-genetic ways, so people living in different environments will often have different cultures. They also try to understand how people interact in social relationships (for example with families and friends). The goal of a cultural anthropologist is to learn about another culture by collecting data about how the world economy and political practices affect the new culture that is being studied.

Cultural anthropologists study how people who share a common cultural system organize and shape the physical and social world around them, and are in turn shaped by those ideas, behaviors, and physical environments. Much of anthropological theory has originated in an appreciation of and interest in the tension between the local (particular cultures) and the global. They look at the different ways people dress and communicate in different societies. Many anthropologists work in their own societies looking at economics, health, education, law, and policy (to name just a few topics). They systematically explore topics such as technology and material culture, social organization, economies, political and legal systems, language, ideologies and religions, health and illness, and social change.

Cultural anthropology has a rich methodology, including participant observation, interviews, and surveys. It is distinguished by the research methods employed in the study of human cultures. This field is based primarily on cultural understanding gained through first-hand experience, or participant observation within living populations of humans.