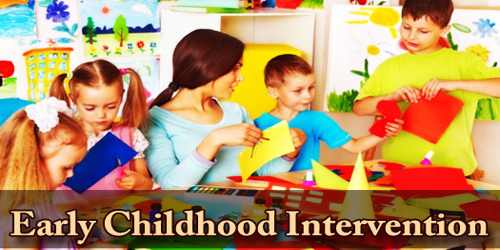 Early childhood intervention (ECI), sometimes called simply early intervention, a field concerned with services for infants and young children (aged birth to six years) that are intended to prevent or minimize developmental disabilities or delays and to provide support and promote the fulfillment of potential and general well-being. Some states and regions have chosen to focus these services on children with developmental disabilities or delays, but Early Childhood Intervention is not limited to children with these disabilities.

The mission of early childhood intervention is to assure that families who have at-risk children in this age range receive resources and supports that assist them in maximizing their child’s physical, cognitive, and social/emotional development while respecting the diversity of families and communities.

Early childhood intervention seeks to initiate interventions to minimize limitations related to individual, social, and environmental factors. It recognizes the central role of the family in the child’s development and is based on the provision of individualized intervention for the child and family. Interventions focus on reducing or removing physical, cognitive, emotional, social, and environmental barriers and promoting the child’s growth, development, and health through stimulation and provision of support. Early childhood intervention builds on biomedical, behavioral, social, and educational research and requires the contributions of specialists from many disciplines. It is a complex and continually evolving field with broad interdisciplinary involvement, attracting researchers from areas as diverse as psychology, early childhood education, occupational therapy, language pathology, social work, and public health.

The goal of early intervention is to give children and families the support they need now before a child has “fallen behind” in education or developmental expectations. Early intervention services delivered within the context of the family can aid with the below through the services of physical, occupational, and speech therapy. Some examples include:

Children diagnosed with conditions such as Down syndrome, autism spectrum disorders, cerebral palsy, and communication disorders were initially the primary recipients of early childhood intervention. However, children with developmental delays and children with risk factors associated with low birth weight, disadvantaged environments, and neuromotor problems are increasingly likely to be served in early intervention programs.

Early childhood intervention (ECI) came about as a natural progression from special education for children with disabilities. Many early childhood intervention support services began as research units in universities (for example, Syracuse University in the United States and Macquarie University in Australia) while others were developed out of organizations helping older children.

In the 1990s, many states in the US put into place a program where the child’s pediatrician can recommend a child for early childhood intervention screening. These services are usually provided free of charge through the local school district or county, depending on the state.

There are many different types of interventions to meet the needs of different children. For example, a child with ADHD will need different support than a child with autism. These are some examples of the services that may be available to children as part of early intervention:

However, if a child is premature it is not correct to compare them to this list of developments to be achieved by the age of three. Their chronological age of a premature child needs to be considered. That is, if a child is 12 weeks old but was born four weeks early, then the child’s chronological age is only eight weeks. This is the age that needs to be considered when comparing the child’s developments to others.

A recent discovery has also suggested that in some premature children the delays do not appear until the age of three, suggesting that all premature children receive Early Intervention Therapy rather than just those who appear to have developmental delays.