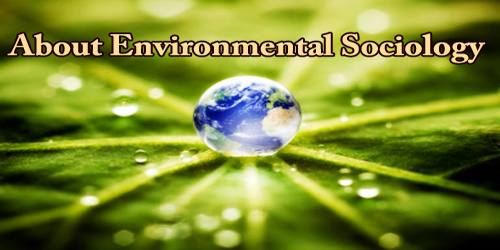 Environmental sociology emerged as a subfield of sociology in the late 1970s in response to the emergence of the environmental movement in the 1960s. It represents a relatively new area of inquiry focusing on an extension of earlier sociology through the inclusion of physical context as related to social factors.

Environmental sociology emerged alongside what scholars have termed the New Ecological Paradigm (NEP) a perspective that became prevalent during the 1960s as a response to the loss of ecosystems and nonhuman species due to the growth of industrialization and urbanization in the United States and Europe. Drawing from the ideas of early preservationists and conservationists such as Aldo Leopold, John Muir, Gifford Pinchot, Robert Marshall, George Perkins Marsh, and later, Rachel Carson, the NEP calls for a healthy balance between human economic activities and the needs of ecosystems, arguing that human social systems must reduce their demands and impacts on nonhuman nature (Catton & Dunlap 1980, Dunlap & Catton 1979, Dunlap & Van Liere 1978).

Three Functions of the Environment – The biophysical environment serves many essential functions for human populations, as it does for all other species, but three basic types can be singled out. First, the environment provides us with the resources that are necessary for life, ranging from air and water to food to materials needed for shelter, transportation, and the vast range of economic goods we produce. Human ecologists thus view the environment as providing the “sustenance base” for human societies, and we can also think of it as a “supply depot.” Some resources, such as forests, are potentially renewable while others, like fossil fuels, are nonrenewable or finite. When we use resources faster than the environment can supply them, even if they are potentially renewable (such as clean water), we create resource shortages or scarcities (Catton 1980).

Second, in the process of consuming resources humans, like all species, produce “waste” products; indeed, humans produce a far greater quantity and variety of waste products than do other species. The environment must serve as a “sink” or “waste repository” for these wastes, either absorbing or recycling them into useful or at least harmless substances (as when trees absorb carbon dioxide and return oxygen to the air). When the land was sparsely populated and the utilization of resources was minimal, this was seldom a problem. Modern and/or densely populated societies generate more waste than the environment can process, however, and the result is the various forms of “pollution” that are so prevalent worldwide.

Humans, like other species, must also have a place to exist, and the environment provides our home where we live, work, play, travel, and spend our lives. In the most general case, the planet Earth provides the home for our species. Thus, the third function of the environment is to provide a “living space” or habitat for human populations. When too many people try to live in a given space, the result is overcrowding, a common occurrence in many urban areas (especially in poorer nations). Some analysts suggest that the entire planet is now overpopulated by human beings, although efforts to determine the number of people the Earth can support has proven to be difficult and contentious (Cohen 1995).

Sociology developed as a scholarly discipline in the mid and late-19th and early 20th centuries, in a context where biological determinism had failed to fully explain key features of social change, including the evolving relationship between humans and their natural environments. In its foundational years, classical sociology thus saw social and cultural factors as the dominant, if not exclusive, cause of social and cultural conditions. This lens down-played interactive factors in the relationship between humans and their biophysical environments.

According to C. Wright Mills (1959), the sociological imagination grasps the relationships between personal biography and collective history, private troubles and public issues, individual preferences, and societal values, psychology and politics. While Mills argued that analysis of social structures, institutions, and privilege characterize the very best social studies, he also argued these cannot be understood independently of the inner life of men and women and the decisions they make. Neither, he argued, can order, structure, institutions, and privilege be understood independently of the ways in which power is enacted and contested.

For environmental sociologists, Mills’ integration of micro- and macro-level theory and his illustration of this approach through analysis of anomie and other problems of modernity resonate with contemporary experiences of environmental injustice and a host of other ways in which individuals and communities are caught up in environmental issues at a variety of scales. But the idea of the sociological imagination also speaks to the possibility we might do more than simply document such problems. Conceiving sociological practice as the exercise of a particular kind of imagination suggests creativity, the relevance of sociological insight to broader publics, and the possibility of social change. The sociological imagination suggests that environmental sociology ought to be as focused on questions of what could be as it is on questions of what is not as an exercise in wishful thinking, but as an exercise in understanding and informing the ways in which future social and ecological relationships are assembled, contested and reassembled.

Although there was sometimes acrimonious debate between the constructivist and realist “camps” within environmental sociology in the 1990s, the two sides have found considerable common ground as both increasingly accept that while most environmental problems have a material reality they nonetheless become known only via human processes such as scientific knowledge, activists’ efforts, and media attention.

In other words, most environmental problems have a real ontological status despite our knowledge/awareness of them stemming from social processes, processes by which various conditions are constructed as problems by scientists, activists, media, and other social actors. Correspondingly, environmental problems must all be understood via social processes, despite any material basis they may have external to humans. This interactiveness is now broadly accepted, but many aspects of the debate continue in contemporary research in the field.