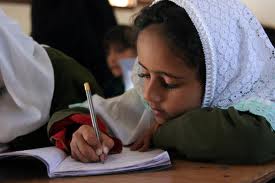 Education is a human right and an essential tool for achieving equality, development, and peace. Nondiscriminatory education benefits both men and women and ultimately equalizes relations between them. In today’s world, empowering women is one of the crucial elements in successful social and economic development and one of the means to do that is to provide girls with more than just basic education. To become agents for change, women must have equal access to educational opportunities. Female education contributes to poverty alleviation, improved Nutrition and reduced fertility. Education also improves women’s own health outcomes and life expectancy, their ability to influence family decisions and their likelihood of engaging in formal paid employment. Aside from the intrinsic value of education, better-educated women are more productive and have higher incomes; they marry later and have fewer, healthier and better-educated children. Educated women are more active in civic affairs. Perhaps most important, an educated woman can more easily avoid the vicious cycle of poverty. Instead, she can be part of a virtuous cycle of education that ensures the well-being of her descendents and her country. Their contributions had been measured by a study, which revealed that an increase in female educational attainment raises the subsequent growth rate of real GDP per capita. The estimate reveals that an additional year of female schooling raises the growth rate between two to four percent per year. So strong are the benefits that many experts are convinced that investment in the education of girls may well be the highest-return investment available in the developing world. In a word, Bangladesh is a developing country and behind her les and slow development lack of proper female education is one of the causes.

Objective of the study

scope of the study

The importance of female education is accredited in the education system of our country. Female Education bears the importance of national development. So to have a thorough study on the education of women is one of the important issues in the context of Bangladesh. Here efforts have been given to find out the problems and also the prospects of female education. Most of the women drop out from the education after or before completing secondary level. Behind their dropping out there are several causes -as – poverty ,early marriage, lack of parents, insufficient stipend, burden of household chores, lack of security and so on. So the range of this term paper is rather vast. Because f the limitation of time and opportunities all the areas of the study on female education cannot be included.

In this section, I describe the framework for analysis, including the specific features of data collection and question posed. I gathered the primary data from group and individual interviews with the 20 female participants of 124 F.T.C. Since not all girls in rural Bangladesh actually receive the stipend, the student’s group includes a mix of stipend recipients and non-recipients. This is also the case with parents and out of school girls. The parent’s group consists of both mothers and fathers. The teachers group includes primarily male teachers since only one fifth of secondary school teacher are female. I have also collection data from secondary source. The sources include journals, books & internet.

Limitations of the study

Mainly due to time Limitation, I was not able to make the study much informative, resourceful, elaborate and analytical. During the Foundation Training Course participants are not allowed to work outside to conduct survey for long time. Besides, preparing a term paper is one of many activities during this period. Therefore, it was not possible for me to pay full attention to work on this research. So the study has many limitations mentioned below:

Bangladesh is a populous low-income county with a relatively young population and low literacy rates, particularly among women and the poor. Recent estimates for the population ages over 11 years put female literacy rates st 35.6 percent as opposed to 47.6 percent for males (Amaed et al, 2005)

The education system is vast comprising some 150,00institutin,760,000 teachers and million students attending all levels up to university (Ahmaed et al, 2007) A high level of administrative centralization of women as teacher further characterize education in Bangladesh. Inequality related to socio -economic status and rural- urban divide persists, despite system- wide enhancements since 1990. At the primary level, 18 million students are engaged in four broad categories of school.

Two government programmers were instrumental in advancing EFA objectives the Food for education programmer (FFE) launched in 1993 and its successor, the primary Education stipend programmers, which came into effect in 2002. Both programmers were found to increase enrolment, attendance and grade progression of primary school aged children from poor landless families. They did succeed in brining children into school (Ahmed et al, 2005). The net primary enrolment rate3 increased from 82.0 percent in 1996 to 89.7 percent in 2004 (Ahmaed et al, 2009) (Over these year the rate for boys increased from 83.0 to 84.0 percent, while that for girls increased from 81.0 to 96.0 percent).

Despite these games in number students, serious deficiencies in terms of school quality learning outcomes and completion remain. Nearly half (48percent) of those who enter primary school dropout and fail to complete the full five year cycle(Ahmaed et al, 2006). The highest allocation for development budget have always been for education sector. But one of the challenges that faces Bangladesh education system is persistently low enrollment and school attainment among girls . interrelated economic , social and cultural factors constrain schooling opportunities for girls, particularly at the secondary level. The disparity in access to education between girls and boys is most significant in secondary levels. Secondary Education system in Bangladesh consists of 4 level, Primary Education class(l-V), Secondary Education Class(VI-X), Higher Secondary Education (class XI-XII), and Higher Education. After Finishing Grade X, students have to sit for a public examination and earn Secondary School Certificate (SSC) degree and after finishing grade XII, they earn Higher Secondary certificate (HSC) degree.

The constitution Of Bangladesh has laid down that no citizen can be subject to any prohibition, restricting or prejudicial treatment with regard to admission to any educational institution on though ground of sex. The constitution further empowers the state to make special provision in favor of women. There has long been official acknowledgement that education is beneficial for girls in order to make them better wives and mother. IN 1974,following independence, the newly formed government convened the Qudrat-e-Khuda Education Commission to consider priorities for education policy. The commission report conceptualized women’s education as being useful in domestic life and in traditional gender roles. The commission linked female education to such out comes as children, health and nutrition, and suitable vocations including nursing and teaching (Jalauddin and Chowdhury,1997. ) , In the years since, most policies aimed at promoting girls education have tended to follow these goals, with the more recent emphasis on population control.

Girls education policies in Bangladesh have recognized that some parents are reluctant to invest in their daughter’ education. In a patriarchal system here daughters marry into another family, parents may decide that an investment in their daughter education is not a sound use of limited resource (Raynor, 20005).this tendency intensifies with poverty.

Throughout the sub-sector and often not recognized, institutions and school have not benefited form supervision received ,acute shortage of teacher in many school exists , some teacher are ill- prepared for their task, school and students lack sufficiently learning materials, physical facilities are inadequate for the number of students requiring access to schooling, and instructional time is insufficient. All these shortcomings have to be overcome at a short span of time.

Using the FSP as a case study, Raynor 90 assesses how attitudes have changed since introduction of the program me. She finds that individuals still have differing views about why and for girls as usury, whereas they view it a necessity for boys. For some, education is seen as a luxury, it becomes normal each other family considerations, including labor needs at time of harvest, childcare, money shortages and fears concerning reputation, as more important. The men and adolescent boys interviewed by Raynor tended to consider girls education strictly within the context of girls future roles as wives , they .stated, for instance, that girls should not be more educated than their husband ,even if schooling enhances employment prospects. Mother and adolescent girls, on the other hand , acknowledgement girls education to have wide implication s such as independence better living condition and increased self-reliance. Despite a range of perceptions, Raynor concludes that the community largely views female education in a positive light, while still adhering to prevalent social conventions.

In setting the data, I have special attention to raising similar issues with the female participants of 124 F. T. C.

Problem of female education are following:-

a)   Poverty is obstarcle for female education.

b)   Female are deprived of education due to parents poverty.

a)   Guardians think that if female  is aged, they will not get any good bride.

b)   Financial limitations of guardians.

a)   Illiterate Guardians always comment as negative on women education.

b)   They have negative idea that women will do no help in future.

a)   Most of the family controvert female education because of religion.

c)   A lot of intellegence can’t continue their education because religion disparity.

a)   Most of the women can’t read because of communication system.

b)   Also for long distance girls can not go their school.

c)   Lack of communication road are also the cause for lacking women education.

a)   Lack of residence facilities most of the women can’t continue their education process.

b)   Lack of security female become loser for doing their education.

b)  Every ages of women are caught behind by eve-teasing thats why female education dropping out day after day.

a)   Most of women can’t continue their study becasue of security.

b)   When female stays in hostel their parents feel lack of securities.

c)   In communications way such as bus, train and other women also feel unsecurities. So that their parents do not agree to read the female in long distance.

a)       Guardians and the teachers of the community should motivate the girl students.

b)       Govt. and community should motivate and build the awareness among the students both girls and boys to over come this problem.

c)       Govt. and political leaders should take some steps to reduce the social disparity.

d)       Govt. and concern authority should ensure the residential facility for the girls students. So they can continue their study more.