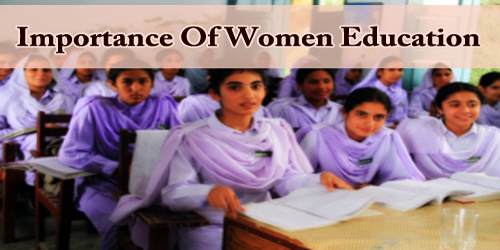 Education means learning or study of existing knowledge and cultural heritage. It means learning from the achievement of our ancestors, making our contribution in it by improving, advancement in existing technology, and transfers it to the next generation in a preplanned manner which can be used for making a prospering future. Humanity has achieved a lot from start and it would be a pity to lose all this only way to save all this is to transfer the knowledge and technology we possess by educating people so that they can also bear the fruit of their ancestor’s achievement.

Education makes us capable of acquiring new skills and being able to communicate with others in a civilized manner. Education is the basic right of everyone and therefore while providing education facilities, we should not discriminate among genders or sexes. Unfortunately, this discrimination still prevails in many parts of the world and therefore it is a need to make people understand that a woman also deserves to be educated and it is their basic right too just like men.

Women’s education is very important for the country to fully develop. It is like an effective medicine to cure a patient completely and provide health back. An educated woman has the capability to handle her home and professional life. The moral aim of education is the physical and intellectual development of the child. The only aim of education is ‘complete knowledge’ or ‘knowledge, more knowledge, and yet more knowledge’. An educated woman has the skills, information, and self-confidence that she needs to be a better parent, worker, and citizen. An educated woman will also be more productive at work and better paid. Indeed, the dividend for educational investment is often higher for women than men.

The main points for the importance of women education:

Basic Right – First of all, education is the basic right for everyone and when we say everyone we should not forget that women are also a part of this lot. Society has a large population of women and we cannot have such a large population as illiterate, it will be our huge loss. All the girls and women whether they are rich, poor, young, old, married, unmarried, widow or with any social status have their basic right of education. Education is not a privilege but a fundamental right.

Increased Literacy – Of the 163 million illiterate youth across the globe, nearly 63 percent are female. Offering all children education will prop up literacy rates, pushing forward development in struggling regions.

Human Trafficking – Women are most vulnerable to trafficking when they are undereducated and poor, according to the United Nations Inter-Agency Project on Human Trafficking. Through providing young girls with opportunities and fundamental skills, this billion-dollar industry can be significantly undermined.

Political Representation – Across the globe, women are underrepresented as voters and restricted from political involvement. The United Nations Women’s programs on leadership and participation suggest that civic education, training, and all-around empowerment will ease this gap.

Equality in society – Inequality and discrimination always start from the root level. When a boy goes to school and his sister stays back just because she’s a girl this sows a seed of discrimination in the mind of the boy. He feels that he is superior just because he is a boy and with no sensible logic to prove it. When women participate in education by going to schools and colleges with boys, the boys realize the basic rights of education and don’t develop a superiority complex. So, educating women along with men promotes the idea of equality and democracy.

Makes Independent and Builds Confidence – It is absolutely true that education makes a person independent. Education provides us with the skills to make ourselves capable of offering services to others and earning a livelihood. If women become educated and earn for themselves then they don’t have to depend on their family for anything. This builds their confidence and makes them take their decision on their own. They realize their worth and their uniqueness. Therefore, education for women is really important in making women independent and confident.

Later Marriage and Smaller Families – As suggested by the United Nations Population Fund, in underdeveloped countries, one in every three girls is married before reaching the age of 18. In a region where a girl receives seven or more years of education, the wedding date is delayed by four years.

Income Potential – Education also empowers a woman’s wallet by boosting her earning capabilities. According to the United Nations Educational, Scientific, and Cultural Organization, also known as UNESCO, a single year of primary education has shown to increase a girl’s wages later in life by 20 percent.

Poverty Reduction – When women are provided with equal rights and equal access to education, they go on to participate in business and economic activity. Increased earning power and income combat against current and future poverty through feeding, clothing, and providing for entire families.

Development of the nation – Women make approximately 50% of the total population. If they are left uneducated then a large part of the nation will not be contributing towards its growth which is a major problem. Therefore, educating women will promote the development of a country.

Man and women are like the two sides of a coin. Without one, the other cannot exist. Education women can not only give an educated family but the Education of women can also be helpful in eradicating many social evils such as dowry problems, unemployment problems, etc. Social peace can easily be established. A woman has to play three distinct parts in the course of her life in each of which certain duties are expected of her. The first duty of a woman is to be a good daughter. The second is to be a good wife. And the third is to be a good mother. Education teaches a mother what she should be. It also teaches her how she would do it to be a good daughter, a good wife, and a good mother.

Only With the help of education women can know their rights. Women belong to a weaker section of society because she suffers from many handicaps due to rigid, outdated social customs, and religious practices. But an educated woman cannot be exploited easily. She is aware of her rights and will go any length to defend them.

To spread the importance and improve the level of women’s education all over the country, countrywide national propaganda and awareness programs are very necessary. An educated woman can educate her whole family and thus the whole country.

Also, one of the mother’s highest duties is the education of her children at the time when their mind is not amenable to instruction. A child’s whole future life, to a large extent, depends on the teaching it receives in early childhood and it is needless to say that this first foundation of education cannot be well laid by an ignorant mother. Thus education will enable women to make their children, husbands, and parents truly happy. Consequently, it is very important that women should be educated. On all these grounds female education is a vital necessity.