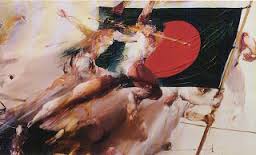 Political History of Bangladesh after independence begins in 1971 with the independence of Bangladesh from Pakistan.In 1947 the subcontinent became to independent. But is mater of sorrow that on the thought of two nationalism. Muslim and Hindu Bangladesh joined with Pakistan the Pakistani ruler group dominated Bangladesh is a conolisum. In this position the people’s of Bangladesh had to make is political party. 23 June 1949 established Awami Mulsim League. Awami Muslim League Made is golden role in language movement is Awami Muslim League participated in fourth alliance party in the national pole in 1954 and succeded.

The Rules of Ziaur Rahman

Although Ziaur Rahman came with power of army in ring but he made a political party in 1978 called B.N.P. In the pole of 1979 Ziaur Rahman elected as the president of Bangladesh general asmani was his opposite leader. It was president election. In 1979 Ziaur Rahman gave amendment of the constitution. In this amendment all his army ruling works became to authority. In 1981 Ziaur Rahman was died by some army officer in chittagong section.

Vice president Satter took the change of president. But after some day at general Earsad took the charge by throwing army power. Bangladesh 10 state its democracy for second time. All the right of politics cut short the freedom of press closed. It is very important to note that a general Earsad called back Sheikh Hassina form London. Hassina took the charge of chairman of Awami League. After Khaleda Zia took charge the chairman of B.N.P. General Earsad ruled the country as the liked. It was very much need of movement.

Shaeikh Hassina and Khaleda Zia along with others political party made a strong movement against Earsad that is why Earsad gave national pole in 1986. In this pole Awami League part and became to opposite party. The situation came out of control day after day in a critical situation. In 1991 Earsad hand over his power under the charge of justice Shahabuddin Ahmed. In the possession of free fair election.

In the pole in 1991 B.N.P came in rule and rule (1991-1996) this time called the first democracy government rule after 1975. But it was mater of sorrow Bangladeshi political party’s had no trust each to another.

In the national pole in 1996 Awami League did not take part in election. So this election did not allowed by international diplomacy. After some day B.N.P gave 13th amendment and joined the part of C.T.G. by the C.T.G we got a election in 1996 and it came to accept by nation. Awami league came to rule.

Comparision of democracy in difference ruler:

In the time of Ziaur Rahman (1975-1978). In 1979 the national pole came out during Ziaur Rahman some essential development grown out but men losted their right of politics. During Earsad democracy failed in a block hall. Because he was trainiant and did not care to politics. He also accepted his evil rule by 8th amendment. He used religion emotion of peoples. He added Islam as our national religion.

The year 1991 is remarkable for the nation because this year Bangladesh came back to democracy rule. But it is our pot luck after taking authority B.N.P engaged with corruption. They wanted to fill all vacancy by their party people democracy came as personal development.

That is why B.N.P losted their mandet and popularity. So they wanted to empower them self by any how. They made plan to influence the pole. Awami League did not take part in the pole. So Bangladesh faced a new crisis B.N.P made a pole of are side and gave 13th amended and C.T.G take place. Awami League came to thrown. But our tradition does not change politics depend on terrisum dominate of against party came only works of power thrown party. We shaw Awami League also dominated came as the main works.

2001-2006:          A new era of Bangladesh B.N.P came to thrown and make the politics corrupt 20 they gave as a weapon of wining in pole. So in 2006 Bangladesh faced the most critical situation. Awami League did not support the C.T.G of Hasan Mahmud Khandoker and than Professor Eajuddin Ahmed. In 11th November Fokruddin Ahmed took the charge of government.

Military backed CTG in 2007 and Aftermath

As mentioned above, on 11th January, 2007 a new order emerged in the politics of Bangladesh and this is the CTG led by Dr. Fakhruddin Ahmed and backed by military. Law adviser of this CTG Barrister Moinul Hossain once declared that this government was a military backed CTG and there has to be an exit route for this government. However, the following day Military Chief Moin U Ahmed stated that the government was not a military backed CTG; it was a constitutional CTG and the military was giving necessary assistance to the civil administration under the normal constitutional arrangements. Reforms and activities of this Government so far have been detailed in brief below:

On 10th July, 2007 Army Chief Moin U Ahmed said that the constitution should be reviewed through a ‘Constitution Commission’ for preparing new laws and mechanisms to ensure accountability and effective governance. He stated the an elected government may undertake the constitutional review after elections are held by the end of 2008 when a constitution commission might be formed. This is not only an important issue but it also goes to the heart of the present political malaise in the country. Many political leaders of major parties have also realised that intra- party political reforms are not enough for genuine democracy, and have also suggested some constitutional reforms with a view to running an accountable government and parliament. It is suggested that the Commission should consider the following list of issues:

Emergency and Arrest of People:

Around 286,000 people including former ministers, lawmakers, political leaders and business tycoons have been arrested across the country on charges of crime and corruption since the state of emergency was declared on January 11, 20067. Of them police arrested 260,000, Rapid Action Battalion about 9000 and the army-led joint forces over 17000 throughout the country. Among them were about 600 listed criminals. The high profile arrests were made after Chief Adviser Fakhruddin Ahmed’s caretaker government declared war on corruption and criminal godfathers.

This formula suggests that country’s two main political parties AL and BNP should be reformed by retiring or removing their present chairpersons. This is because these two parties are responsible for current political conditions and they should accept the blame and step down. Opponents of this formula argue that the minus-two formula is undemocratic as the selection of leadership is a prerogative of the party council. The party councilors can choose anyone as the party leader, and keep him/her as leader as long as they wish. However, people must have choice to elect their leader but if the same leader holds on to the party chairmanship, there will be no choice left to the people. Thus the argument that the party councilors can chose anyone as their party chief and keep him or her leader as long as they want- is not consistent with the theory and principle of democracy. Therefore, the minus-two formula, although referring to two specific persons is, indeed, a general principle of the democratic political system. More specifically, this formula is key to a lasting cure for our ailing political parties8.

The pole of 2008 is very importance for Bangladesh. Because this pole bearing out he democracy in Bangladesh. The ruling age of Fakruddin is a block chapter, our right of voice and politics was closed. Business men were very much abased by the government. Although a C.T.G has authority to role for 3 months but it was 2 years. After 2 years we got on election.

Awami League took the charge of government but the political evil and domination of opposite party donet on change. Awami Leagud also gave an amendment excluding C.T.G. It is now for discussed mater in national life. B.N.P declared not to join in election under internal government. Now our politics will go on to bad position day by day. We should change our tradition of getting power and thrown. Our national problem jointly and make sure our social welfare. Our political party should not take step against government but should take step for common people. Our political party should have honour to each to another.