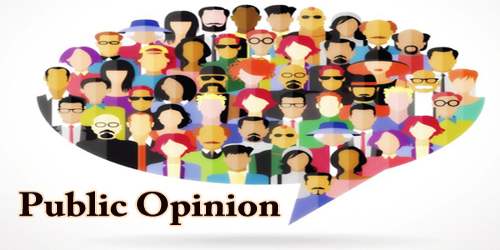 Public opinion is the measure of what the public thinks about a particular issue, party, or individual political figure. Some scholars treat the aggregate as a synthesis of the views of all or a certain segment of society; others regard it as a collection of many differing or opposing views. Writing in 1918, the American sociologist Charles Horton Cooley emphasized public opinion as a process of interaction and mutual influence rather than a state of broad agreement.

This concept came about through the process of urbanization and other political and social forces. For the first time, it became important what people thought as forms of political contention changed. Democracy requires public opinion because it derives authority from the public.

The American political scientist V.O. Key defined public opinion in 1961 as “opinions held by private persons which governments find it prudent to heed.” Subsequent advances in statistical and demographic analysis led by the 1990s to an understanding of public opinion as the collective view of a defined population, such as a particular demographic or ethnic group.

Historically, it’s been pretty difficult to accurately measure what the public thinks about a particular issue. However, most forms of democracy are based on the understanding that the government will function with the interests of their people in mind. We can find an acknowledgment of the people’s role in many historical documents, including the Constitution of the United States, which begins with the phrase “We, the People.” This 1940s poster from the National Archives highlights the importance of public opinion in policymaking.

The influence of public opinion is not restricted to politics and elections. It is a powerful force in many other spheres, such as culture, fashion, literature and the arts, consumer spending, and marketing and public relations.

The term public opinion was derived from the French opinion Publique which was first used in 1588 by Michel de Montaigne in the second edition of his Essays (ch. XXII).

The French term also appears in the 1761 work Julie or the New Heloise by Jean-Jacques Rousseau.

In his eponymous treatise on public opinion published in 1922, the American editorialist Walter Lippmann qualified his observation that democracies tend to make a mystery out of public opinion with the declaration that “there have been skilled organizers of opinion who understood the mystery well enough to create majorities on Election Day.” Although the reality of public opinion is now almost universally accepted, there is much variation in the way it is defined, reflecting in large measure the different perspectives from which scholars have approached the subject. Contrasting understandings of public opinion have taken shape over the centuries, especially as new methods of measuring public opinion have been applied to politics, commerce, religion, and social activism.

Sociologists, in contrast, usually conceive of public opinion as a product of social interaction and communication. According to this view, there can be no public opinion on an issue unless members of the public communicate with each other. Even if their individual opinions are quite similar to begin with, their beliefs will not constitute a public opinion until they are conveyed to others in some form, whether through print media, radio, television, the Internet, or telephone or face-to-face conversation. Sociologists also point to the possibility of there being many different public opinions on a given issue at the same time. Although one body of opinion may dominate or reflect government policy, for example, this does not preclude the existence of other organized bodies of opinion on political topics. The sociological approach also recognizes the importance of public opinion in areas that have little or nothing to do with government. The very nature of public opinion, according to the American researcher Irving Crespi, is to be interactive, multidimensional, and continuously changing. Thus, fads and fashions are appropriate subject matter for students of public opinion, as are public attitudes toward celebrities or corporations.

The German sociologist Ferdinand Tönnies, by using the conceptional tools of his theory of Gemeinschaft and Gesellschaft, argued (Kritik der öffentlichen Meinung, 1922), that ‘public opinion’ has the equivalent social function in societies (Gesellschaften) which religion has in communities (Gemeinschaften).

German social theorist Jürgen Habermas contributed the idea of the public sphere to the discussion of public opinion. According to Habermas, the public sphere, or the bourgeois public, is where “something approaching public opinion can be formed” (2004, p. 351). Habermas claimed that the Public Sphere featured universal access, rational debate, and disregard for rank. However, he believes that these three features for how public opinion are best formed are no longer in place in western liberal democratic countries. Public opinion, in western democracy, is highly susceptible to elite manipulation.

Public opinion plays an important role in the political sphere. Cutting across all aspects of the relationship between government and public opinion are studies of voting behavior. These have registered the distribution of opinions on a wide variety of issues, have explored the impact of special interest groups on election outcomes, and have contributed to our knowledge about the effects of government propaganda and policy.

Public opinion can be viewed as the collection of individual opinions, where all opinions deserve equal treatment regardless of whether the individuals expressing them are knowledgeable about an issue or not. Thus, public opinion is the aggregation of preferences of people from all segments of society. The use of public opinion polls to gauge what people are thinking underlies this view. Carroll J. Glynn, Susan Herbst, Garrett J. O’Keefe, and Robert Y. Shapiro, Public Opinion (Boulder, CO: Westview, 1999). By asking questions of a sample of people who are representative of the US population, pollsters contend they can assess the American public’s mood. Susan Herbst, Numbered Voices (Chicago: University of Chicago Press, 1993). People who favor this perspective on public opinion believe that government officials should take into account both majority and minority views when making policy.

It is often the case that opinions expressed in public differ from those expressed in private. Some views even though widely shared may not be expressed at all. Thus, in a totalitarian state, a great many people may be opposed to the government but may fear to express their attitudes even to their families and friends. In such cases, an anti-government public opinion necessarily fails to develop.