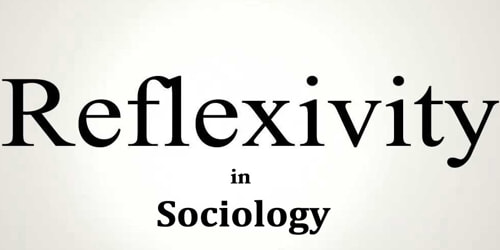 Reflexivity is the theory that a two-way feedback loop exists in which investors’ perceptions affect that environment, which in turn changes investor perceptions. It is a term with rather different meanings in different contexts: in general, it means ‘reflecting’ and specifically, as part of the social research, reflexivity is the process by which the researcher reflects upon the data collection and interpretation process.

Reflexivity refers to circular relationships between cause and effect. A reflexive relationship is bidirectional with both the cause and the effect affecting one another in a situation that does not render both functions causes and effects. In sociology, reflexivity, therefore, comes to mean an act of self-reference where examination or action “bends back on”, refers to, and affects the entity instigating the action or examination.

Reflexivity is, therefore, a methodological issue in the social sciences analogous to the observer effect. Within that part of recent sociology of science that has been called the strong programmed, reflexivity is suggested as a methodological norm or principle, meaning that a full theoretical account of the social construction of, say, scientific, religious or ethical knowledge systems, should itself be explainable by the same principles and methods as used for accounting for these other knowledge systems.

Margaret Archer has written extensively on laypeople’s reflexivity. For her, human reflexivity is a mediating mechanism between structural properties, or the individual’s social context, and action, or the individual’s ultimate concerns. Reflexive activity, according to Archer, increasingly takes the place of habitual action in late modernity since routine forms prove ineffective in dealing with the complexity of modern life trajectories.

While Archer emphasizes the agentic aspect of reflexivity, reflexive orientations can themselves be seen as being socially and temporally embedded. For example, Elster points out that reflexivity cannot be understood without taking into account the fact that it draws on background configurations (e.g., shared meanings, as well as past social engagement and lived experiences of the social world) to be operative.