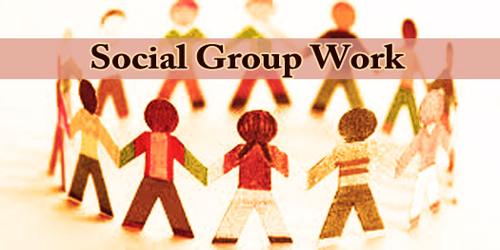 Working in groups is often presented as a good way of dividing work and increasing productivity. It can also be argued that it allows for the utilization of the different skills, knowledge, and experiences that people have.

Social group work as the name suggests is working as a group and it is one among the six approaches in social work. Social group work is carried out in the presence of a group worker whose primary role is to be a facilitator or an enabler who is usually a counselor or a psychotherapist. His/her main objective is to help individuals in a therapeutic group to achieve their goals and individual development through cooperative learning. Social groups are often voluntary in nature and one big advantage of social group work is the enhanced outcome of the activity. It is a psychosocial process which is concerned in developing leadership and cooperation with building on the interests of the group for a social purpose.

Social group work is a method through which individuals in groups in social agency settings are helped by a worker who guides their interaction through group activities so that they may relate to others and experience growth opportunities in accordance with their needs and capacities to the individual, group and community development. It aims at the development of persons through the interplay of personalities in a group situation and at the creation of such group situations as provide for integrated, cooperative group action for common ends. It is also a process and a method through which group life is affected by a worker who consciously directs the interacting process towards the accomplishment of goals which are conceived in a democratic frame of reference. Its distinct characteristics lie in the fact that group work is used with group experience as a means of individual growth and development, and that the group work is concerned in developing social responsibility and active citizenship for the improvement of a democratic society.

Group work is a way to serving individuals within and through small face to face groups in order to bring about the desired change among the client participants. As a result, in schools and colleges, it is often approached as a skill to be learned the ability to work in group-based environments. Within schools and colleges, working in groups can also be adopted as a means of carrying forward curriculum concerns and varying the classroom experience a useful addition to the teacher or instructor’s repertoire.

There are four models in social group work:

Group work is not always of a therapeutic purpose. It is used in many situations. An example is a recreational group or a religious group. Social group work is a method of social work that helps individuals to enhance their social functioning through purposeful group experiences, and to cope more effectively with their personal, group or community problems.

The American Association of Group Workers (1949) describes as:

“The group worker enables various types of groups to function in such a way that both group interaction and program activities contribute to the growth of the individual, and the achievement of the desirable social goal. The objectives of the group worker include provision for personal growth according to individual capacity and need; the adjustment of the individual to other persons, to groups and to society, the motivation of the individual toward the improvement of society and; the recognition by the individual of his own rights, abilities and differences of others. Through his participation, the group worker aims to affect the group process so that decisions come about as a result of knowledge and a sharing and integration of ideas, experiences, and knowledge, rather than as a result of domination from within or without the group. Social Work Intervention with Individuals and Groups through experience he/she aims to produce those relationships with other groups and the wider community which contributes to responsible citizenship, mutual understanding between cultural, religious, economic or special groupings in the community, and participation in the constant improvement of our society towards democratic goals. The guiding purpose behind such leadership rests upon the common assumptions of a democratic society; namely, the opportunity for each individual to fulfill his capacities in freedom, to respect and appreciate others, and to assume his social responsibility in maintaining and constantly improving our democratic societies. Underlying the practice of group work is the knowledge of individual and group behavior and of social conditions and community relations which is based on the modern social sciences. On the basis of this knowledge, the group worker contributes to the group with which he works with a skill in leadership which enables the members to use their capacities to the full and to create socially constructive group activities. He is aware of both program activities and of the interplay of personalities, within the group and between the group and its surrounding community. According to the interests and needs of each, he assists them to get from the group experience, the satisfaction provided by the program activities, the enjoyment and personal growth available through the social relations, and the opportunity to participate as a responsible citizen. The group worker makes conscious use of his relations to the group, his knowledge of the program as a tool, and his understanding of the individual and of the group process and recognizes his responsibility both to individuals and groups with whom he works and the larger social values he represents.”