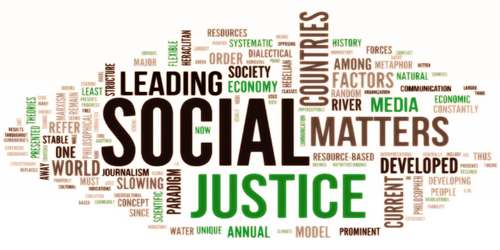 Social Justice is an underlying principle for peaceful and prosperous coexistence within and among nations. It is a political and philosophical theory which asserts that there are dimensions to the concept of justice beyond those embodied in the principles of civil or criminal law, economic supply, and demand, or traditional moral frameworks. Social justice tends to focus more on just relations between groups within society as opposed to the justice of individual conduct or justice for individuals. We uphold the principles of social justice when we promote gender equality or the rights of indigenous peoples and migrants. We advance social justice when we remove barriers that people face because of gender, age, race, ethnicity, religion, culture or disability.

Social justice is a concept of fair and just relations between the individual and society, as measured by the distribution of wealth, opportunities for personal activity, and social privileges. In Western as well as in older Asian cultures, the concept of social justice has often referred to the process of ensuring that individuals fulfill their societal roles and receive what was their due from society. In the current global grassroots movements for social justice, the emphasis has been on the breaking of barriers for social mobility, the creation of safety nets, and economic justice.

Several organizations and institutions provide their own definitions for social justice. Here are a few:

“Social justice may be broadly understood as the fair and compassionate distribution of the fruits of economic growth.” – United Nations (UN)

“Social justice is the view that everyone deserves equal economic, political, and social rights and opportunities. Social workers aim to open the doors of access and opportunity for everyone, particularly those in greatest need.” – National Association of Social Workers

“Social justice encompasses economic justice. Social justice is the virtue that guides us in creating those organized human interactions we call institutions. In turn, social institutions, when justly organized, provide us with access to what is good for the person, both individually and in our associations with others. Social justice also imposes on each of us a personal responsibility to work with others to design and continually perfect our institutions as tools for personal and social development.” – Center for Economic and Social Justice

Historically and in theory, the idea of social justice is that all people should have equal access to wealth, health, well-being, justice, privileges, and opportunity regardless of their legal, political, economic, or other circumstances. In modern practice, social justice revolves around favoring or punishing different groups of the population, regardless of any given individual’s choices or actions, based on value judgments regarding historical events, current conditions, and group relations.

Social justice assigns rights and duties in the institutions of society, which enables people to receive the basic benefits and burdens of cooperation. The relevant institutions often include taxation, social insurance, public health, public school, public services, labor law, and regulation of markets, to ensure fair distribution of wealth, and equal opportunity.

While the concept of social justice can be traced through the theology of Augustine of Hippo and the philosophy of Thomas Paine, the term “social justice” became used explicitly in the 1780s. A Jesuit priest named Luigi Taparelli is typically credited with coining the term, and it spread during the revolutions of 1848 with the work of Antonio Rosmini-Serbati. However, recent research has proved that the use of the expression “social justice” is older (even before the 19th century).

For example, in Anglo-America, the term appears in The Federalist Papers, No. 7: “We have observed the disposition to retaliation excited in Connecticut in consequence of the enormities perpetrated by the Legislature of Rhode Island; and we reasonably infer that, in similar cases, under other circumstances, a war, not of parchment, but of the sword, would chastise such atrocious breaches of moral obligation and social justice.”

In the late industrial revolution, progressive American legal scholars began to use the term more, particularly Louis Brandeis and Roscoe Pound. From the early 20th century it was also embedded in international law and institutions; the preamble to establish the International Labour Organization recalled that “universal and lasting peace can be established only if it is based upon social justice.” In the later 20th century, social justice was made central to the philosophy of the social contract, primarily by John Rawls in A Theory of Justice (1971). In 1993, the Vienna Declaration and Program of Action treats social justice as a purpose of human rights education.

The principles of social justice –

Social justice is also a concept that is used to describe the movement towards a socially just world, e.g., the Global Justice Movement. In this context, social justice is based on the concepts of human rights and equality, and can be defined as “the way in which human rights are manifested in the everyday lives of people at every level of society”.

Everyone has equal opportunities. This doesn’t guarantee that society will be perfect and everyone will always be happy. However, everyone will have a fighting chance at the life they want. They aren’t held back by things out of their control like systemic obstacles or discrimination. There isn’t one clear framework for what successful social justice looks like in practice, but that’s why principles like participation are so important. As long as a nation values social justice and remains committed to equality, progress is possible.