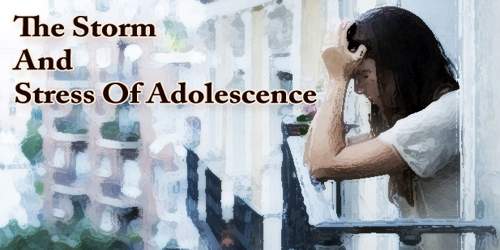 The Storm And Stress Of Adolescence

Children must pass through several stages in their lives to become adults. For most people, there are four or five such stages of growth where they learn certain things: infancy (birth to age 2), early childhood (3 to 8 years), later childhood (9 to 12 years) and adolescence (13 to 18 years). Persons 18 and over are considered adults in our society. Of course, there are some who will try to act older than their years. But, for the most part, most individuals have to go through these stages irrespective of their economic or social status.

World Health Organization (WHO) identifies adolescence as the period in human growth and development that occurs after childhood and before adulthood. This phase represents one of the critical transitions in one’s life span and is characterized by fast-paced growth and change which are second only to those at infancy. Biological processes drive many aspects of this growth and development with the onset of puberty marking the passage from childhood to adolescence. The biological determinants of adolescence are fairly universal; however, the duration and defining characteristics of this period may vary across time, cultures, and socio-economic situations. This period has seen many changes over the past century-puberty for example, it comes earlier than before, people marry late, and their sexual attitudes and behaviors are different from their grandparents, or even parents. Among the factors responsible for the change arc education, urbanization and spread of global communication.

The time of adolescence is a period of preparation for adulthood during, which one experiences several key developments. Besides physical and sexual maturation, these experiences include movement toward social and economic independence, development of identity, the acquisition of skills needed to carry out adult relationships and roles and the capacity for abstract reasoning. While adolescence is a time of tremendous growth and potential, it is also a time of considerable risks during which social contexts exert powerful influences.

Many adolescents face pressure to use alcohol, cigarettes, or other drugs and to initiate sexual relationships putting themselves at high risk for intentional and unintentional injuries, unintended pregnancies, and sexually transmitted infections (STIs), including the human immunodeficiency virus (HIV). Many also experience a wide range of adjustment and mental health problems. Behavior patterns that are established during this period such as the use or avoidance of drugs and taking or abstaining from sexual risk can have long-lasting negative and positive effects on future health and well-being. As a result, adults have unique opportunities to influence adolescents.

Adolescents are different both from young children and adults. Specifically, adolescents are not fully capable of understanding complex concepts, or the relationship between behavior and consequences, or the degree of control they have or can have over health decision-making, including that related to sexual behavior. This inability may make them particularly vulnerable to sexual exploitation and high-risk behaviors. Laws, customs, and practices may also affect adolescents differently than adults.

For example, laws and policies often restrict adolescents’ .access to reproductive health information and services, especially when they are unmarried. In addition, even when services do exist, provider attitudes about adolescents often pose a significant barrier to the use of those services.

Adolescents depend on their families, their communities, schools, health services, and their workplaces to learn a wide range of skills that can help them to cope with the pressures they face and make a successful transition from childhood to adulthood. Parents, members of the community, service providers, and social institutions have the responsibility to both promote adolescent development and adjustment and to intervene effectively when problems arise.