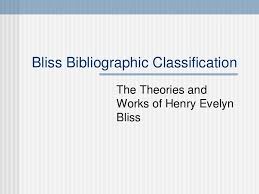 The actual Bliss bibliographic classification is really a library classification system which was created by Henry E. Bliss (1870–1955) and published in several volumes between 1940 and 1953. Although originally devised in the united states, it was additionally adopted by British isles libraries. Bibliographic Classification was not used by many United states libraries. The system was not without its faults, and the format of Bliss’s text was difficult to read.