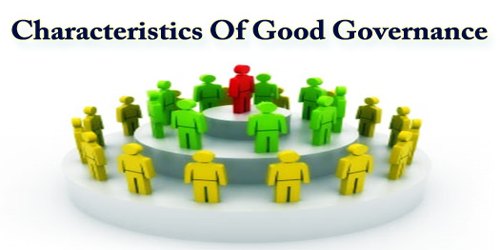 Good Governance means a good rule, and it is an approach to government that is committed to creating a system founded in justice and peace that protects an individual’s human rights and civil liberties. In international development, good governance is a way of measuring how public institutions conduct public affairs and manage public resources in a preferred way. Governance is “the process of decision-making and the process by which decisions are implemented (or not implemented)”. Governance in this context can apply to corporate, international, national, or local governance as well as the interactions between other sectors of society.

The terms “governance” and “good governance” are being increasingly used in development literature. Bad governance is being increasingly regarded as one of the root causes of all evil within our societies. Major donors and international financial institutions are increasingly basing their aid and loans on the condition that reforms that ensure “good governance” are undertaken. According to the United Nations, Good Governance is measured by the eight factors of Participation, Rule of Law, Transparency, Responsiveness, Consensus Oriented, Equity and Inclusiveness, Effectiveness and Efficiency, and Accountability.

The concept of “good governance” thus emerges as a model to compare ineffective economies or political bodies with viable economies and political bodies. The concept centers on the responsibility of governments and governing bodies to meet the needs of the masses as opposed to select groups in society. Because countries often described as “most successful” are liberal democratic states, concentrated in Europe and the Americas, good governance standards often measure other state institutions against these states. Aid organizations and the authorities of developed countries often will focus the meaning of “good governance” to a set of requirements that conform to the organization’s agenda, making “good governance” imply many different things in many different contexts.

Good Governance has 8 major characteristics. It is participatory, consensus-oriented, accountable, transparent, responsive, effective and efficient, equitable and inclusive and follows the rule of law. It assures that corruption is minimized, the views of minorities are taken into account and that the voices of the most vulnerable in society are heard in decision-making. It is also responsive to the present and future needs of society.

Participation requires that all groups, particularly those most vulnerable, have direct or representative access to the systems of government. This manifests as a strong civil society and citizens with the freedom of association and expression.

Rule of Law is exemplified by impartial legal systems that protect the human rights and civil liberties of all citizens, particularly minorities. This is indicated by an independent judicial branch and a police force free from corruption.

Transparency means that citizens understand and have access to the means and manner in which decisions are made, especially if they are directly affected by such decisions. This information must be provided in an understandable and accessible format, typically translated through the media.

Responsiveness simply involves that institutions respond to their stakeholders within a reasonable time frame.

Consensus Oriented is demonstrated by an agenda that seeks to mediate between the many different needs, perspectives, and expectations of a diverse citizenry. Decisions needs to be made in a manner that reflects a deep understanding of the historical, cultural, and social context of the community.

Equity and Inclusiveness depends on ensuring that all the members of a community feel included and empowered to improve or maintain their well being, especially those individuals and groups that are the most vulnerable.

Effectiveness and Efficiency is developed through the sustainable use of resources to meet the needs of a society. Sustainability refers to both ensuring social investments carry through and natural resources are maintained for future generations.

Accountability refers to institutions being ultimately accountable to the people and one another. This includes government agencies, civil society, and the private sector all being accountable to one another as well.

Leaders and the public have a broad and long-term perspective on good governance and human development, along with a sense of what is needed for such development. There is also an understanding of the historical, cultural and social complexities in which that perspective is grounded.

Very few countries and societies have come close to achieving good governance in its totality. However, to ensure sustainable human development, actions must be taken to work towards this ideal with the aim of making it a reality. The Worldwide Governance Indicators is a program funded by the World Bank to measure the quality of governance of over 200 countries. It uses six dimensions of governance for their measurements, Voice & Accountability, Political Stability and Lack of Violence, Government Effectiveness, Regulatory Quality, Rule of Law, and Control of Corruption. They have been studying countries since 1996.