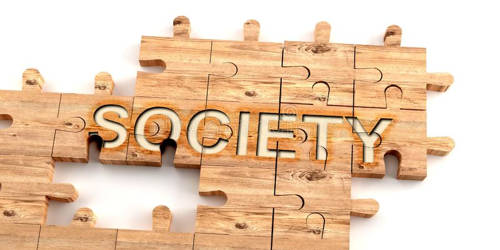 Complex society refers to societies with states and social classes. A complex society is a concept that is shared by a range of disciplines including anthropology, archaeology, history, and sociology to describe a stage of social formation. These took the forms of larger agricultural villages, cities, city-states, and states, which shared many features. The concept was formulated by scholars attempting to understand how modern states emerged, specifically the transition from small kin-based societies to large hierarchically structured societies. It is a recognized stage in evolutionary models of social organization that broadly equates with the idea of ‘states’ or ‘civilizations’ as relatively large‐scale societies in which there are institutionalized inequality and abundant bureaucracy, and power is distributed between several competing centers. Because complex societies have various economic groups, they allow for highly specialized labor and economic activity.

The development of complex societies differs from other societies, not only in the number of differentiated societal parts but whereas in simpler societies that are basically self-regulating, in decision-making functions of its societal components of which these are not generalized and constant. A complex society is characterized by features such as:

Complex society has been a central concern of archaeology, especially the causes of change from non-state to the state organization, and the economic, social, and cultural changes accompanying that transition. The term is mostly used as shorthand to indicate a society with intricate political organization and using technology to expand economic production. Archaeologically, the emergence of such societies is recognized through the development of expansive regional political economies, evidence of corporate organization, the presence of large architectural monuments, distinctive iconography and ideology, and structured mortuary practice. Three kinds of complexity are involved: there are socially and culturally differentiated and unequal groups; social segments have specialized activities and roles; and these societies are geographically complex, with an unequal exchange between specialized regions.