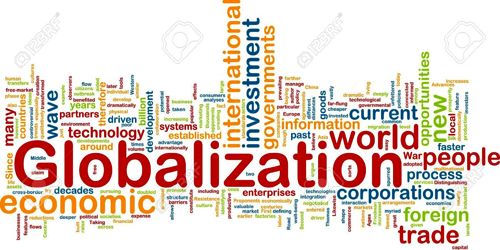 Globalization is a process of interaction and integration among the people, companies, and governments of different nations, a process driven by international trade and investment and aided by technology. This process has effects on the environment, on Culture, on political systems, on economic development and prosperity, and on human physical well-being in societies around the world.

It was not until the 1960s that the term globalization began to be widely used by economists and other social scientists. It had achieved widespread use in the mainstream press by the later half of the 1980s. Since its inception, the concept of globalization has inspired numerous competing definitions.

Globalization expands and accelerates the movement and exchange of ideas and commodities over vast distances. It is common to discuss the phenomenon from an abstract, global perspective, but in fact globalization’s most important impacts are often highly localized. This page explores the various manifestations of interconnectedness in the world, noting how globalization affects real people and places.

A historical and sociological approach to political economy with a belief in the importance of interdependency and the global systemic structure and connected processes. There is only one world system, and the claims by Stalin in The Economic Problems of Socialism shortly before his death in 1953 and others still since then that there are now “two world systems,” one capitalist and another socialist, were an optical illusion. History of globalization is a subject of on-going debate but believed to be stretched over: