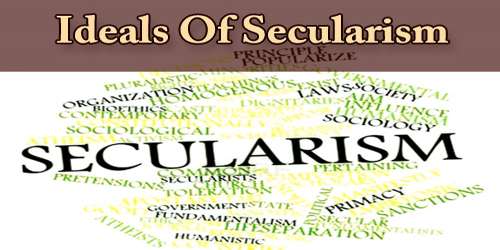 Introduction: Secularism is at fault for a perceived decline in the morality of society, whereas others feel that secularism represents a positive trajectory for society to take in terms of progress. At the same time, however, it is important to note that secularism is hardly an original concept in modern society and that the evolution of secularism can be traced over time. The term “Secular” refers to being “separate” from religion or having no religious base. Secularism term means separation of religion from political, economic, social and cultural aspects of life. Thus religion is only a purely personal matter. It provides full freedom to all religions and tolerance of all religions. It also stances for equal opportunities for followers of all religions. So, no discrimination and partiality on grounds of religion

Secularism came in the train of Renaissance when classical learning and science, based on logic, re-appeared strongly. The domination of Religious Institutions was on the decline. Since then in big countries where men of different religions exist, secularism is being encouraged.

Secularism is one of the most important achievements of any democratic country. It facilitates us with some benefits such as:

Though the leaders of the independent state have struggled hard to make sure the fair execution of the ideology of secularism. But certain problems still need to be addressed to make certain proper, peaceful and fair functioning.

State and religious groups, both should work self-sufficiently and abide by the law at the same time. After some decades of independence still, political parties remain to use the agenda of religious diversity and caste. Sometimes because of personal benefits, some politicians are refusing the motive of creating a secular state.

There are, of course, forces in our polity who are either provoked by countries across our borders or agents to whip up fanaticism and fundamentalism. The government, be it said to its credit, is sparing no pains (trying hard) to put down such harmful forces. On the whole, Asian countries’ secular Socialistic democracy has so far come out with flying colors, following its lofty political ideals of peace, tolerance and international understanding. It had stood the test of times.

Conclusion: It needs to be understood that any state cannot be truly secular with secularism just written in its books. Thus, the complete ideology has to be recognized with grace and implemented equally to all the people. Meanwhile keeping a check on the governmental bodies for any unfair practice of religious groups to gain power.

Hence, each individual should be careful subject to law, regardless of gender, religion, majority or minority status, etc. So, the young generation should be trained in the ideology.