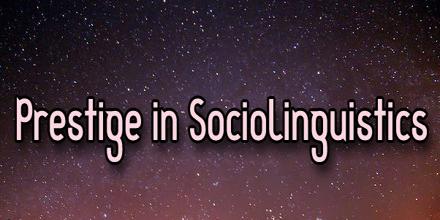 Prestige in Sociolinguistics are not entirely equal to ‘Standard’. In fact, any language variety, be it standard or non-standard, can have prestige among its speakers. Sociolinguists make a distinction between ‘overt prestige’ and ‘covert prestige’ to denote the degree of overall social acceptance of a speech variety. In general, a language or dialect associated with an upper class has positive prestige, while a language or dialect associated with a lower class has “negative prestige”. Prestige in Sociolinguistics are especially visible in situations where two or more distinct languages are in use, and in diverse, socially stratified urban areas, in which there are likely to be speakers of different languages and/or dialects interacting frequently.