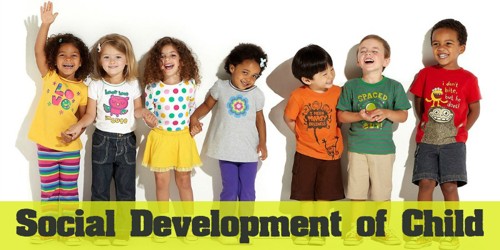 Social Development of a Child

Social Development of a Child

Social development involves learning the values, knowledge, and skills that enable children to relate to others effectively and to contribute in positive ways to family, school and the community.

Round die age of two, he realizes that he is just a little man in the complex order. Others also matter and that he alone does not matter. Giving and taking starts.

Freeman and Showel, “By social growth and development we mean increasing ability to get along well with one and others.”

Hurlock, “It is attaining of social relationship.”

(ii) Dealing with people and learning from them,

(iii) It is a conscious activity. It does not take place auto­matically. Baby deals with adults in his/her immediate environment. According to Mrs. E. B. Hurlock, the important patterns of his social development during this age are:

2nd month on hearing a voice, the baby turns his head.

4th month Stops crying when talked to and makes movements in anticipation of being lifted.

6th month In touch with the adult ‘talks’ to adult.

2 years. The baby likes to do things independently and runs around for the adults-he can bring the newspaper lying at a gate when asked to and when the baby is in the mood. Learns to imitate adults

(i) This is called school going age.

(ii) The number of friend’s increases manifold-permanent associations are formed. Social interaction is at its maximum.

(iii) The child is capable of dealing with many social situations.

Gang means a small group or a spontaneous local group. It is formed by children themselves. It is not authorized from outside.

It is at this age-sex differences come in. Boys and girls become conscious of their sex and they tease one another.

(i) Social activities depend upon sex.

(ii) They are conscious of social approval and disapproval.