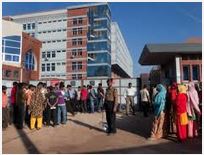 The Role of World Bank for social development for Bangladesh

The Bangladesh remarkably steady growth was possible due to a number of factors including population control, financial deepening, macroeconomic stability, and openness in the economy.

1. The World Bank is listening to the voices of the poor in Bangladesh more than ever before.

The World Bank is increasing support for projects that directly impact people at the grassroots level.  It now follows a consultative process. This means it is going to stakeholders and talking to the people for whom the projects are meant to benefit. Their voices are then considered as policies are proposed.
One example is its’ Social Development Fund (SDF). Community groups are getting organized, assessing their own needs and writing their own proposals for SDF funding.

Dhaka has today become a much livable place with most of the toxic fumes from two-stroke vehicles removed from the air. This is the outcome of the Government of Bangladesh’s Dhaka Urban Transport Project (DUTP), funded by the World Bank.It has been estimated that exposure of air pollution in Dhaka causes several million cases of sickness each year.  There was no initiative undertaken in the county to improve the air quality prior to the DUTP. There has been much improvement in Dhaka’s air quality since implementation – and the effect can be felt by all.  Over time, an improvement in environmental conditions can have a favorable impact on foreign investment, which will reduce poverty.

3.The World Bank is the largest external funder of micro credit in Bangladesh.

The total number of female micro credit borrowers in Bangladesh has now reached 12 million.An important tool for empowering women, World Bank first entered into micro credit financing in December 2000 with $180 million which was channeled to the borrowers through a local NGO, Palli Karma Shahayak Foundation (PKSF). After success of the program, the Bank committed another $151 million, making the World Bank the largest external funder of micro credit programs in Bangladesh.
And to reach the poorest of the poor, its’ Financial Services to the Poor (FSP) project is one of its’ most successful initiatives.   It includes hard-core poor people from all walks of life including beggars, sex workers and women.

4. The World Bank is Bangladesh’s largest external funder of education and has assisted Bangladesh in achieving gender parity in education.

The World Bank provides around $200 million annually to the Government to support education, making it the largest external funder of education in Bangladesh. It is playing an important role in textbook improvement, as well as enhancing the quality of instruction and increasing enrollment in schools through various incentives such as stipends. Our $150 million Primary Education Development Project II (PEDP II) is the main driver in this sector.

Its’ $100 million Education Sector Adjustment Credit aims to assist the Government in finding ways to increase quality, cost-effectiveness and access to secondary education.

It has also supported girls’ education. Girls’ secondary school enrollment as a percentage of total enrollment increased from 44.73 percent in 1994 to 54.68 percent in 2000.

5. The World Bank leads the donor consortium for health programs in Bangladesh that have contributed significantly to improving the health of Bangladeshis.

The World Bank is the largest development partner in the Government’s health program. Through its’ projects, it is working towards reducing malnutrition, mortality, and fertility and promoting healthy lifestyles in Bangladesh.  For example, consider the Health and Population Sector Program (HPSP), a five-year nationwide effort that began in 1998. An innovative approach was adopted under which the poor received vouchers to buy health service from the health center of their choice. This project was followed by another $600 million.

In April 2005, it committed another $300 million through the Health, Nutrition and Population Sector Program II (HNPSP II).

6.  The World Bank works in partnership and the civil society plays an ever larger role in the Bank’s work.

The World Bank has become a more open organization. A revised Policy on Disclosure of Information since January 2002 helped it reaffirm the importance of transparency and accountability in the development process. This is now its’ policy to be open about its’ activities and to welcome and seek out opportunities to explain its’ work to the widest possible audience.

The Country Assistance Strategy (CAS) for Bangladesh, which describes the type and amount of support for a country, is being prepared through extensive consultation with the civil society, NGOs and the private sector. The World Bank believe that such partnerships increase the acceptability and sustainability of its work.  Pro-poor development, private sector growth and governance will be main areas of focus of the CAS. For the first time the CAS is being jointly done with other donors of Bangladesh – a process initiated to better harmonize donor efforts.

Bangladesh’s agriculture has undergone radical changes over the last decade with the introduction of new technology and liberalization. World Bank has financed projects that have laid the foundation of modern agriculture. In addition to research, these projects also focused on water management, irrigation, and drainage and flood control to reduce agricultural risk and make more land available for crop production.

One such example is the National Minor Irrigation Development Project in rural Bangladesh which promoted growth in agriculture through increased private investment in irrigation development.

8.     The World Bank is deeply involved in building and improving roads and infrastructure in Bangladesh.

World Bank is deeply committed to developing Bangladesh’s infrastructure. The Jamuna Bridge and the Mohakhali Flyover are the two of our most frequently cited projects. But beyond these two projects, they are much more involved in Bangladesh’s transport sector.

They first became involved in this sector in the mid-70s by building the Feni by-pass road. In the mid-80s, they supported development of the highway to the northern region. Last year they completed a major project – Nalka-Bonpara highway – which shortened road communication to Rajshahi and Natore by 50 kilometers.

They also support infrastructure improvement in rural Bangladesh. Roads are the lifeline of village retailers as it gives them direct access to market places. They have constructed around 45,000 Culverts in rural areas.

They promote a sound investment climate for Bangladesh, sharing the knowledge that the World Bank has gained from working in countries around the globe.  For industry to grow, infrastructure is vital – a stable power supply, reliable roads, and so on. They are closely involved in power sector development and supporting uninterrupted, quality power generation. They also support the development of Bangladesh’s road network. They are supporting the Government’s effort to modernize its customs department.  A faster, more efficient customs clearance process is crucial to being globally competitive today.

Around 95 percent of the staff in their Dhaka office—plus additional staff in their Washington office—are Bangladeshi.  While a large part of the World Bank’s value is in its global experience and expertise, local knowledge is indispensable to effective development.  They also work closely with the government, civil society and communities in designing their support for the country. Most importantly, their overall assistance to the country was developed after broad consultations and is specifically designed to support the goals outlined by the government and the people of Bangladesh.

The Grammen bank, Bangladesh krishi Bank, Social Investment Bank, Bngladesh shilpa Bank, Karmasangsthan Bank and also World Bank are trying to social development of Bangladesh. The overall growth pattern of banking sector in Bangladesh is quit insignificant and inconsistent with the objectives and costs of its reform programs.