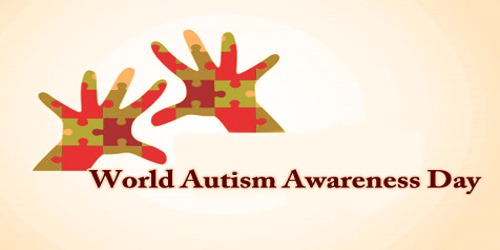 Autism is a developmental disability that remains with a person for his or her whole life. This condition affects the brain’s functions. The first signs usually appear before a child is three years old. People with autism often:

Autism affects girls and boys of all races and in all geographic regions and has a large impact on children, their families, communities, and societies. The prevalence is currently rising in many countries around the world. Caring for and educating children and young people with this condition places challenges on health care, education, and training programs.

World Autism Awareness Day is an internationally recognized day on 2nd April every year, encouraging the Member States of the United Nations to take measures to raise awareness about people with autistic spectrum disorders including autism and Asperger syndrome throughout the world. It was designated by the United Nations General Assembly resolution “62/139. World Autism Awareness Day”, passed in council on 1st November 2007, and adopted on 18th December 2007. It was first observed in 2008. It was proposed by the United Nations representative from Qatar, Her Highness Sheikha Mozah Bint Nasser Al-Missned, Consort of His Highness Sheikh Hamad Bin Khalifa Al-Thani, the Emir of the State of Qatar, and supported by all member states. This resolution was passed and adopted without a vote in the UN General Assembly, mainly as a supplement to previous UN initiatives to improve human rights.

Many events are organized on World Autism Awareness Day. These include:

Special clinics are also organized for families dealing with autism to obtain consultations with pediatricians, educational psychologists, and social workers.

Autism is a lifelong neurological condition that manifests during early childhood, irrespective of gender, race or socioeconomic status. The term Autism Spectrum refers to a range of characteristics. Appropriate support, accommodation, and acceptance of this neurological variation allow those on the Spectrum to enjoy equal opportunity and full and effective participation in society. Autism is mainly characterized by its unique social interactions, non-standard ways of learning, keen interests in specific subjects, an inclination to routines, challenges in typical communications, and particular ways of processing sensory information.

The rate of autism in all regions of the world is high and the lack of understanding has a tremendous impact on the individuals, their families, and communities. The stigmatization and discrimination associated with neurological differences remain substantial obstacles to diagnosis and therapies, an issue that must be addressed by both public policy-makers in developing nations, as well as donor countries.

World Autism Day is one of only seven official health-specific UN Days. The day itself brings individual autism organizations together all around the world to aid in things like research, diagnoses, treatment, and acceptance for those with a developmental path affected by autism. World Autism Awareness Day is not a public holiday.