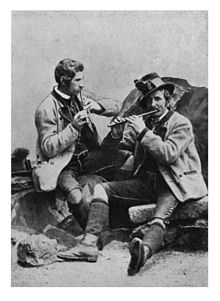 Folk songs and music of a community, uninfluenced by any sophisticated musical rules or any standard Music styles. Bangladesh has a rich folk music, which includes both religious and secular songs.

Both words and tune are appealing.
Despite its universal appeal it uses local dialect.
ix.        It depends upon nature and the rural environment.
x.        It is an explicit manifestation of the joys and sorrows of daily life.
xi.        It uses simple and natural rhythms.
It contains a strong emotive expression of human love and separation. i.        Bhatiyali: These types of songs are generally sung by boatman. It is seen nearly all regions of Bangladesh, basically the riverside area.
ii.        Bhawaiya: Actually this kind of sung by the Coachman .Specially Rajshahi, Dinajpur, Rangpur, and Pabna.
iii.       Baul and spiritual songs: It sung in Birbhum and Kushtia.
iv.       Jarigan: Jarigan sung as like as Charya by groups. It sung in Dhaka, Mymensingh, Sylhet, and Faridpur.
v.        Sari: In Sylhet and Mymensingh a group of singer sings this song with a particular theme.
vi.    Gambhira: In Rajshahi, Malda there is a special kind of song called Gambhira. It is sung by a grand-father and a grand-son about a specific topic.

Murshidi: It’s a religious song.
Roof-beating songs: This song sung at the northern regions of Bangladesh.
ix.        Wedding sings: Basically in rural areas wedding songs are sung in weddings.
x.        Nil Puja: To celebrate the Puja in Bangladesh   this type of songs are sung.
xi.        Pastoral songs: It’s a one kind of regional song, sung by the tribes.  Specially In Mymensingh, Sylhet, Habiganj.

At present the condition of folk song in our country is very poor. Now a day our rich traditional folk song inevitable influenced by western music and culture. Band and pop music is getting popular in country. Now the modern Bangla song and also the folk song sung in western melody. TV has become the major source of entertainment. Bad kind of remixes and music videos are shown at the TV. Because of that we forget and neglect our rich traditional folk song. Now we like to present the condition of our folk song in our country in a graph. Though today’s generation has lack of interest in folk music, after then many singers of our country trying to encourage our young generation to listen our folk song. They are trying to modify the tunes, uses new instruments without changing the lyrics. Organizing a lot of concert for increasing popularity of folk song to our young generation and the people of all ages. Doing this they have to do a lot of hard work so we called them the present warriors. Such as-

i        We have to do a lot of concert of folk music.
ii.       Creating consciousness to our young generation that our own song is the best.
iii.      Government has to increase its attempts for folk music.
iv.      The number of the sponsor should be increased.
v.       Create a permanent academy for folk music.
vi.      Increase interest of music companies.
vii.      Ensure the financial stability of the folk singers.
viii.     Honored them with judgment.
ix.       Give them chances to perform not only in the country but also out side the country.
x.      Identify new folk singer and patronize them.
xi.      More program in TV channels.
xii.      Protecting the real lyrics and tunes.
xiii.      Remove listening   remixes.
xiv.      Some specific kind of folk song that is not available now should be protected.