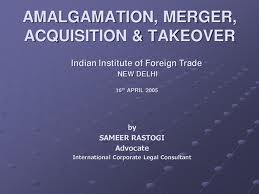 The combination of one or more companies into a new entity. An amalgamation is distinct from a merger because neither of the combining companies survives as a legal entity. Rather, a completely new entity is formed to house the combined assets and liabilities of both companies.

Times are changing and so are corporate strategies. Companies are becoming larger than ever in an endeavor to control larger markets and in search of new customer bases. There are many ways in which a company tries to expand. It can either grow horizontally or can expand vertically. Amalgamation and acquisition are two strategies which allow companies to become larger and more resourceful. There are people who do not understand the implications of these two strategies that are very commonplace in today’s market situation. This article attempts to take a closer look at amalgamations and acquisitions to highlight their differences.

Amalgamation is sought when two competing companies join hands to avoid competition and also to have a larger customer base. Amalgamation is mostly friendly whereas acquisitions are both friendly as well as hostile.