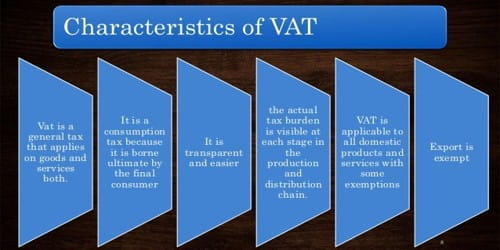 Value Added Tax (VAT) is an indirect tax on spending. It produces large and regular tax revenue. It helps to reduce tax evasion. It is also known as the consumption tax.

The main characteristics of value-added tax (VAT) are stated as follows:

It is a comprehensive tax imposed by a standard ratio at a single rate in the whole country, although some countries apply multiple ratios.

2. The VAT is a broad-based tax as it covers the value added to each commodity by a firm during all stages of production and distribution. It applies to both manufactured goods.

3. A VAT is based on a value-added principle. Value-added can be obtained either by adding payments to factors of production (i.e., wages+rent+interest+profit) or deducting the cost of inputs from sales revenue.

4. It is a substitute for sales tax, hotel tax, contract tax, and entertainment tax. It is a multipoint sales tax that helps set off for tax paid on purchases.

5. It is based on a self-assessment system and provides the facility of tax credit and tax refunds. It is a general tax levied on all goods and services, whether they are manufactured locally or imported.

6. It avoids cascading effect existed in sales tax and contains a catch-up effect. It is a tax that involves the state taking part in its issuance, in the context of its financial policy, to stimulate investment and attract capital. 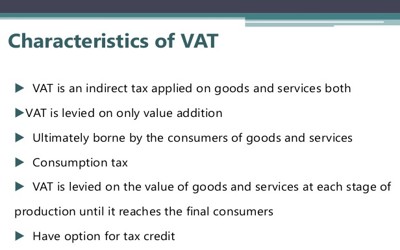 In a nutshell, VAT is an indirect tax that is imposed on different goods and services on the basis of the value-added amount in different stages of production and distribution. It is not a genuinely new form of taxation but merely a sales tax administered in a different form. Although it is borne by the final consumer, VAT is collected at each stage of production and distribution chain.