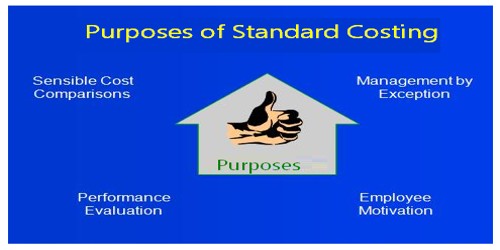 Concept and Meaning of Standard Costing

Concept and Meaning of Standard Costing

Standard costing is an important subtopic of cost accounting. Standard costs are usually associated with a manufacturing company’s costs of direct material, direct labor, and manufacturing overhead. It is the practice of substituting an expected cost for an actual cost in the accounting records, and then periodically recording variances showing the difference between the expected and actual costs.

The objectives of standard costing technique are as follows:

Historical costs are the actual costs that are ascertained after they are incurred. During the initial stages of development of cost accounting, historical costing systems like process costing, contract costing, service costing etc. were available for ascertaining the costs. Since standard costs are usually slightly different from actual costs, the cost accountant periodically calculates variances that break out differences caused by such factors as labor rate changes and the cost of materials. The cost accountant may also periodically change the standard costs to bring them into closer alignment with actual costs. The historical costing methods are used to determine the cost incurred for the production of a particular products or completion of a particular job.

The historical costing systems suffer from several limitations; some of them are as follows:

1) the actual costs of the goods that were produced, and

2) the costs that should have occurred for those goods.

The costs that should have occurred for the actual good output are known as standard costs.

Standard is a predetermined measurable quantity set in defined conditions against which actual performance can be compared, usually for an element of work, operation or activity. Standard costing is a technique that establishes predetermined estimates of the cost of products and services and compares these costs with the actual costs as they incur. it can be considered as a yardstick to measure the efficiency with the actual cost incurred. Hence, standard costing is system of costing which makes a comparison between the standard cost of each product or service with its actual cost to determine the efficiency of the operation, with a view to take corrective actions at the earliest possible time.

Although the terms budgeted and standard costs are sometimes used interchangeably, budgeted costs normally describe the total planned costs for a number of products. Usually budgetary control is operated with a system of standard costing because both systems are interrelated but they are not interdependent.