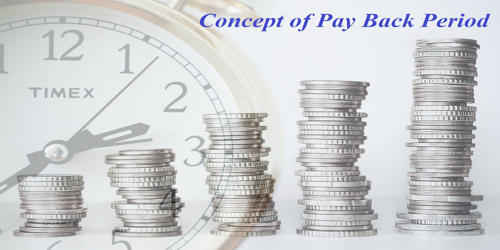 Concept of Pay Back Period (PBP)

Concept of Pay Back Period (PBP)

The pay back period is the traditional method of evaluating investment proposals under capital budgeting. It refers to the amount of time it takes to recover the cost of an investment. It is the simplest and perhaps the most widely employed quantitative method for appraising capital expenditure decisions. It is also called payout or pay off period.

The desirability of an investment is directly related to its payback period. Shorter paybacks mean more attractive investments. It calculates the period of return back of investment. Although calculating the payback period is useful in financial and capital budgeting, this metric has applications in other industries. For example, if solar panels cost $5,000 to install and the savings are $100 each month, it would take 4.2 years to reach the payback period.

Pay back period is the time period required to recover the investment made in a project. It is a simple way to evaluate the risk associated with a proposed project. Thus, PBP measures the number of years to pay back the original outlay from cash inflows generated by an investment proposal. An investment with a shorter payback period is considered to be better since the investor’s initial outlay is at risk for a shorter period of time.

Though the payback method is widely used due to its simplicity, it suffers from the following problems: