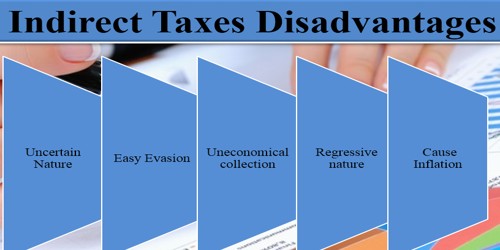 An indirect tax is charged on producers of goods and services and is paid by the consumer indirectly. These taxes tend to take a higher percentage of income from those on a low income. The disadvantage is mainly for peoples, that it increases the cost of the product. Examples of indirect taxes include VAT,  excise duties (cigarette, alcohol tax) and import levies.

(a) The indirect tax is uncertain. These taxes are not equitable. As demand fluctuates, the tax will also fluctuate. The tax will raise the price and contract the demand. As soon as a tax on a commodity is imposed its price rises.

(b) It is regretful as the tax burden to the rich and poor is the same. The tax is wrapped in the price. Hence, rich and poor pay the same amount, which is obviously unfair.

(c) Indirect tax has a bad effect on consumption, production, and employment. Higher taxes will reduce all of them. A fraction of the money unit cannot be calculated, so ever middleman tends to charge more than the tax.

(d) Most of the taxes are included in the price of goods or services. As a result, taxpayers do not know how much tax they are paying to the government. These taxes do not categorize on the income-based.

(e) The cost of collection is quite heavy. Every source o production has to be guarded. The large administrative staff is required to administer such taxes. This doesn’t stop corruption as the easiest way of not declaring a sales bill to avoid tax, still works.

(f) These Taxes discourage industries if raw materials are taxed. This will raise the cost of production and impair its competitive capacity.

In simple words, as these taxes fail to satisfy the principle of distributive justice, it is considered to be a regressive tax. However, poor people feel more burden.