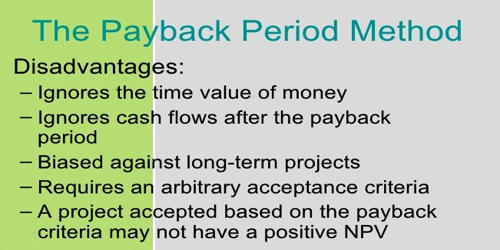 Disadvantages of Pay Back Period (PBP)

Disadvantages of Pay Back Period (PBP)

(c) Only cash flow before the pay back period is considered. The payback method considers the cash flows only till the time the initial investment is recovered. It fails to consider the cash flows that come in subsequent years. The method additionally doesn’t take into consideration the inflow of cash after the payback period. Cash flow occurred after the PBP is not considered.

(d) The payback method is so simple that it does not consider normal business scenarios. Usually, capital investments are not just one-time investments. Rather such projects need further investments in the following years as well.

(e) Along with the fact that the payback period scores only focus on the initial return of the investment, it is a naturally short-termed focused budgeting technique. For any business that is looking to invest, recoup, and reinvest as fast as they can, this will work great.

(f) The payback period method really is a short-term only type of budgeting. If your company is concerned at all about cash flow for the business over time, this method is not going to give you any information to work with.

(g) When this type of budget is used for a project, it puts a lot of weight on the cash flow in the short-term. This also means that the entire evaluation is going to be weighted towards capitalizing on the short-term gains. However, in certain cases, it may be smarter to look at longer-term cash flow.

Despite the disadvantages, the payback method is still used widely by businesses. The method works well when evaluating small projects and the projects that have reasonably consistent cash flows.