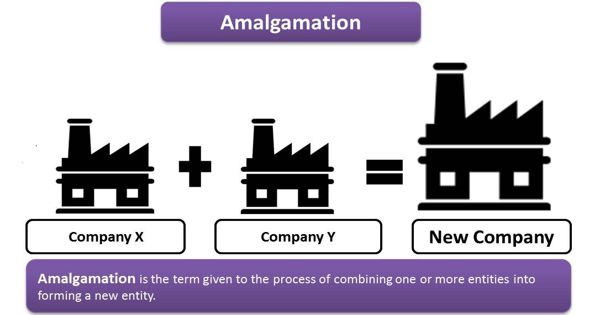 Amalgamation is defined as a combination of one or more companies into a new entity. It is an arrangement where two or more companies consolidate their business to form a new firm or become a subsidiary of any one of the companies. It is one of the tools that can help companies avoid competition among them and add to the market offerings. It is for the mutual advantage of the acquirer and acquired companies.

Amalgamation is the combination of two or more companies into a new entity by combining the assets and liabilities of both entities into one.

The main features or characteristics of amalgamation can be highlighted as follows:

The nature of the business of existing companies is similar. The terms of amalgamation are finalized by the board of directors of the constituent companies.

Generally, purchase consideration is discharged by the issue of equity shares of the purchasing company. Capital amount is increased by a combination of companies. The transferor company is liquidated and all assets and liabilities are taken over by the transferee company.

Consideration for the amalgamation means the aggregate of the shares and other securities issued and the payment made in the form of cash or other assets by the transferee company to the shareholders of the transferor company.