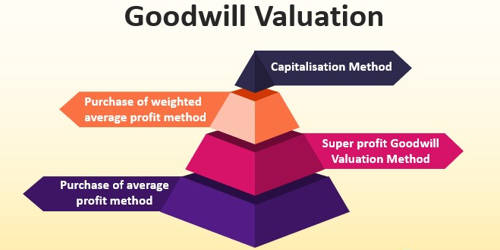 Goodwill is an intangible asset that is not visible or cannot be touched but can be purchased and traded and is real. The valuation of goodwill is based on the assumption obtained by the valuer. The need for determining goodwill often arises when one company buys another firm.

The following are the important bases and methods in valuing goodwill:

(1) Average profit method – Under this method, the average profit of the last few years is multiplied by one or more years in order to ascertain the value of goodwill of the firm. Under this method, the value of Goodwill is calculated by multiplying the Average Future profit by a certain number of year’s purchase. [Goodwill = (Future maintainable profit after tax x No. of years purchase)].

(2) Super Profit Method – Super profit is the excess of estimated future maintainable profits over normal profits. Super-profit represents the difference between the average profit earned by the business and the normal profit (on the basis of a normal rate of return for representative firms in the industry) i.e., the firm’s anticipated excess earnings. The goodwill under this method is ascertained by multiplying the super-profits by a certain number of year’s purchase. As such, if there is no anticipated excess earning over normal earnings, there will be no goodwill.

(4) Sliding Scale Valuation Method – Under this method, the distribution of profit which is related to super-profits may vary from year to year. In other words, in order to find out the value of goodwill, sliding scale valuation may be considered relating to the super-profits of an enterprise.

(5) Annuity Method – Under this method, goodwill is calculated by taking average super profit as the value of an annuity over a certain number of years. The present value of this annuity is computed by discounting at the given rate of interest (normal rate of return).