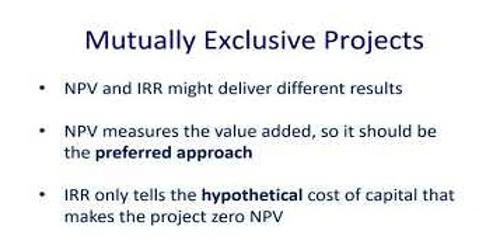 Mutually exclusive is a situation where two or more scenarios can’t happen simultaneously. If one scenario occurs it is not possible for the others to take place. The concept of mutual exclusivity is often applied in capital budgeting. Mutually exclusive is a statistical term describing two or more events that cannot happen simultaneously. It is commonly used to describe a situation where the occurrence of one outcome supersedes the other. Companies may have to choose between multiple projects that will add value to the company upon completion. Some of these projects are mutually exclusive. When two projects are mutually exclusive, it means that the firm wants to undertake only one of these two projects, not both.

Projects are independent if the cash flows of one are not affected by the acceptance of the other. Conversely, two projects are mutually exclusive if acceptance of one impacts adversely the cash flows of the other; that is, at most one of two or more such projects may be accepted. In case of mutually exclusive projects, the project with highest net present value or the highest IRR or the lowest payback period is preferred and a decision to invest in that winning project excluded all other projects from consideration even if they individually have positive NPV or higher IRR than hurdle rate or shorter payback period than the reference period.  If the NPV of one project is greater than the NPV of the other project, accept the project with the higher NPV. If both projects have a negative NPV, reject both projects.