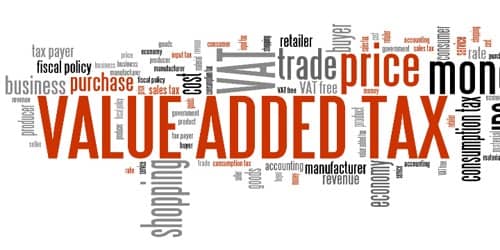 A value-added tax (VAT) can be explained as a type of consumption tax.  It is based on a taxpayer’s consumption rather than their income. It is usually implemented as a destination-based tax.

The basic principle to implement a Value Added Tax involves presuming that a business is obligated with some percentage on the product price less all taxes paid previously on the goods.  The following are the principles which govern value-added tax (VAT):

The VAT is a transparent tax. It is an account-based tax system. The VAT has made the tax system transparent. Tax evasion is not pervasive where the accounting system is transparent.

VAT removes the cascading effect. Cascading effect means a tax on tax i.e. tax is charged on the value including tax. But VAT has removed this effect by not including the VAT in the cost price to the second stage of the distribution channel. But under the sales tax system, sales tax paid at one stage is included in the cost price for another stage.

(4) Principle of Destination and Zero Rating

Under this principle, goods and services are taxed at consumption point, bot based on production. Goods and services that are exported are taxed at zero rates (i.e the taxpayers get a refund of VAT earlier paid in purchasing raw materials and interrelated goods but they should not pay tax on added value.)